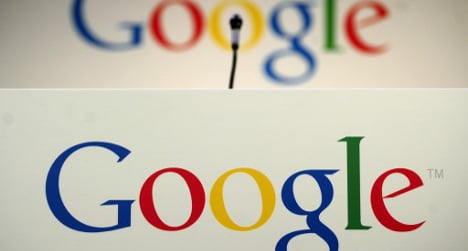 A microphone stands in front of a Google logo during a press annoucement at Google headquarters in New York in May. Photo: Emmanuel Dunand/AFP

The Spanish Data Protection Agency said it found evidence of five serious privacy law breaches — each punishable with fines of up to €300,000 ($395,000).

It also cited evidence of one minor infraction, which could be punished with a fine up to €40,000.

The agency said it acted after investigating Google's new policy, introduced last year, which enables it to track the activity of users across its search engine, Gmail, the Google+ social networking platform and other services it owns, which include YouTube.

The changes make it easier for Google to collect and process data that could be used by advertisers to target individuals with offers tailored to their specific interests, thereby increasing the company's revenue potential.

Spain said Google Spain and Google Inc.'s new policy could allow it to combine personal information collected from different services and use it for other ends.

"Google does not give clear information about the use it will make of users' data, so they are unable to know precisely why their personal data is being collected or how it will be used," the agency said in a statement.

The data protection agency listed the suspected serious infractions as disproportionate use of private data and diverting private data for other uses.

The agency also Google's storing of private data for excessive or undetermined periods, it's failure to handle private data in a legitimate way, and obstructing users in the exercise of their rights.

Google was also suspected of the minor infraction of failing to provide information to users.

The Spanish agency said it investigated Google within the framework of a coordinated action with data protection agencies in Britain, France, Germany, Italy and the Netherlands.

The 27-member European Union warned Google in October 2012 that its data protection procedures did not comply with an EU directive on the subject and gave the company four months to change them.

That deadline passed without any action, prompting France to set up the task force of individual member states interested in pursuing the issue with Google.