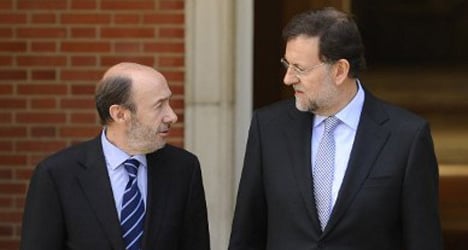 The leaders of Spain's two main political parties will put aside their differences to present a united stance before the European Council. Photo: Pierre-Philippe Marcou/AFP

The meeting is scheduled to take place at 6pm in the Palace of Moncloa, the official residence of the Prime Minister.

Government sources indicated the get-together is about allowing the leaders of the country's two largest parties to make sure their pact gets maximum support from MPs when it is debated in parliament in the near future.

Issues on the agenda include putting an end to the fragmentation of Europe's financial markets, promoting youth employment and increasing the funds of the European Investment Bank made available to small and medium-sized companies, among other subjects.

Minority parties in Spain's parliament such as the Green Party and Catalonia's nationalist CiU have expressed their annoyance at being marginalized in the pact-making process.

Catalan daily El Periodico reported that although this afternoon's meeting will focus on the European Council summit to be held on June 27th and 28th, other subjects could be on the agenda.