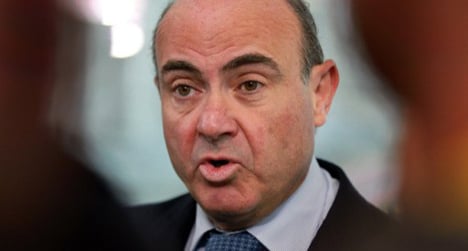 "We don't have all the data regarding this quarter" but "it is much less bad than the previous one," he told an economic gathering in Santander, northern Spain.

Spain has been in recession since 2011 in the second such downturn since the collapse of a housing boom in 2008 that has driven the unemployment rate to a record 27 percent.

And in contrast to the announced signs of growth, Spain paid sharply higher prices for short-term debt on Tuesday reflecting persistent investor concern that the country's problems are far from over.

Last year Spanish gross domestic product contracted by 1.4 percent, the second worst yearly slump since 1970, and the government forecasts it will shrink again by 1.3 percent this year.

In the first three months of the year, Spain shrank by 0.5 percent on a quarterly basis, its seventh straight quarterly decline.

But De Guindos said the second quarter "marks a turning point, with quarterly growth that should be closer to zero".

"This turning point may indicate that we were leaving the recession behind us," he said.

De Guindos' comments echoed those of Budget Minister Cristobal Montoro who said on Monday Spain may be heading for a "turning point" thanks to strengthened public finances that narrowly avoided needing a full-scale EU bailout last year.

"We are emerging from the crisis," he told the economic gathering in Santander, citing a positive current account balance, improved access to international financial markets and easing inflation.

But the Spanish treasury on Tuesday sold €1.087 billion worth of six-month bills at an average yield of 0.821 percent, up from 0.492 percent from the last similar auction held in May.

It raised another €3.951 billion through the sale of 12-month bills at an average yield of 1.395 percent, also up sharply from May.

To avoid shocks on the markets, Spain last year received €41 billion ($55 billion) as part of a credit line from its eurozone partners to rescue its stricken banks.

After the banking rescue was agreed, Spain was considered close to demanding a full sovereign bailout but resisted and has since mostly seen its borrowing costs ease as market tension over its public finances has relaxed.