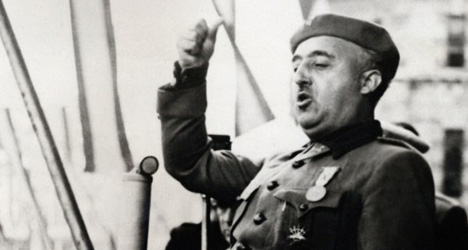 The obligation to remove public symbols of the dicatorship in Spain's Historical Memory law does not apply in special cases. Photo: -/AFP

Under Spain's Historical Memory Law, governments around Spain are obliged to remove symbols of the dictatorship of the right-wing leader Francisco Franco from all public buildings and spaces.

Franco ruled Spain from the end of the country's civil war in 1939 to his death in 1975, but his leadership caused deep divisions within Spanish society.

However, the window in Alicante was described by the government on Tuesday as being one of the most important pieces of Art-Deco from the 1945-1947 period , according to Spanish daily 20 Minutos.

Any modification, according to a parliamentary statement by the ruling Popular Party (PP), "would undermine the integrity of the whole" and would constitute a "risk" to its conservation.

It pointed out that the Spanish Historical Memory Law, which was introduced by the Socialist government in 2007 to give rights to victims of the dictatorship despite fierce opposition from the conservative PP, does not apply in cases of special "artistic, architectural or artistic-religious" value.

It went on to note that the obligation to remove the shields and emblems of the Franco government is overruled by this 'artistic value' clause.

The parliamentary statement was made in response to a question from United Left congressman Ricardo Sixto.

The government also gave the opinion that the window with the Francoist emblematic shield could serve as a historical record "to help future generations reflect on the period of history in which it was made in order to better pass on democratic values."

As such, it was decided that the 1981 Shield Law should also be applied, which orders the conservation of emblematic shields in buildings declared as historical monuments or in which the removal of the shields could damage the building's structure.

A number of precedents were cited to support the government's decision.

The United Left had asked the Bank of Spain last year to take advantage of renovation work in the building to remove the controversial decoration "once and for all" from the window of their trading floor in Alicante.