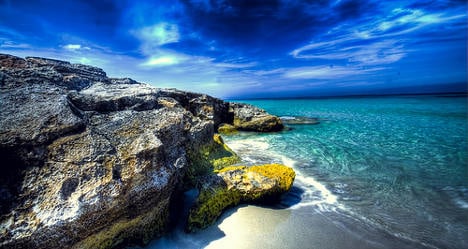 The Spanish island of Formentera was without internet on Monday after a mishap involving a yacht anchor. File photo: peacockarmgaddeon/Flickr

Formentera, home around 11,000 people, lost internet and voice connection after the anchor of a large luxury yacht broke the all-important voice and data carrying cable in the early hours of Tuesday morning.

The incident happened about 1500m off the coast of Es Cubells in neigbouring Ibiza.

"We don't have internet or wifi, and many of the cash machines on the island are working," Noelia Ferrer from Formentera's Sa Volta hotel told The Local.

"That means tourists are having trouble accessing their money and we don't know who is trying to book rooms with us.

"It's a very difficult situation in the height of the tourist season."

Ferrer also told The Local that her customers were "very surprised" that a yacht's anchor could destroy the only cable providing internet to the island.

A spokesperson from telecommunications company Telefonica, meanwhile, said that a provisional service was already being set up.

"We have two radio links in place already," Carlos Prieto explained to The Local.

He said that meant around 20 percent of the around 2,600 internet users on the island already had service.

Prieto said more provisional services would role out in the next day or so, and that a cable laying boat was now en route from Sicily.

Normal service would be restored within a week, said the Telefonica spokesperson.

Yesterday the Balearic Islands Government issued a statement on Monday evening promising to guarantee a basic telephone service for Formentera during the outage.