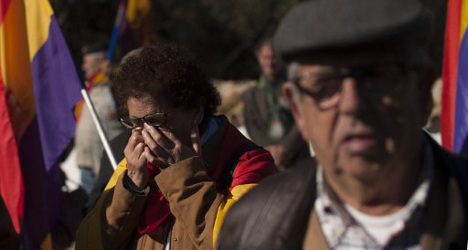 A woman cries during the funeral ceremony for 28 people executed by pro-Franco forces during the Spanish Civil War in Cortes de la Frontera. Photo: Jorge Guerrero/AFP

In 2008 Spanish judge Baltasar Garzón opened an investigation into the disappearance of 114,000 people during the war and the dictatorship and ordered the exhumation of at least 19 mass graves.

But after state prosecutors challenged his jurisdiction to open the probe on the grounds that the alleged crimes were covered by an amnesty passed by parliament in 1977, two years after Franco's death, responsibility for the cases passed to regional courts.

Of the 47 separate cases which the High Court referred to provincial courts, at least 38 have since been shelved by Spanish judges, Amnesty International said in a report titled "Time passes, impunity remains".

The leading human rights group said it was not able to find out the status of the remaining nine cases because requests for information went unanswered.

"In a generalized way the judiciary is shelving the complaints that are filed," the president of the Spanish branch of the group, Esteban Beltran, said at a presentation of the report in Madrid.

"It seems like there is an attempt by state powers to guarantee impunity for these crimes."

Spanish courts have shelved cases on the grounds that the statute of limitations has run out on the alleged crimes, that the crimes were covered by the amnesty or because those allegedly responsible are dead, according to the Amnesty report.

Spain is also not cooperating with requests from Argentine courts probing complaints by relatives of victims of Franco-era repression, the report added.

For example, the Spanish government in May blocked several elderly Spanish victims of the Franco dictatorship from testifying by video link in a hearing held at a Argentine court, said Beltran.

"Spain does not investigate nor does it cooperate with investigations carried out in other countries," he said.

Garzón, who drew international attention for trying to extradite Chile's former dictator Augusto Pinochet, was charged with overstepping his powers for opening the probe into Franco-era atrocities.

He had argued that the acts were crimes against humanity and therefore not subject to the 1977 amnesty.

In 2012 Spain's Supreme Court acquitted Garzón of the charge but ruled that his decision to open the probe was "a mistake" because those allegedly responsible are presumed to be dead.

Garzón was disbarred for 11 years in a separate case that year for illegally recording defence lawyers' conversations with clients as part of a probe into a corruption case. He now heads WikiLeaks founder Julian Assange's legal team.

In 2007, the then socialist Spanish Government headed up by Prime Minister José Luis Rodríguez Zapatero passed the Historical Memory Law.

In the law, victims from both sides of the Spanish Civil War are recognized, and rights are given to both the victims and the descendants of victims of the Civil War and the dictatorship of General Francisco Franco which followed.

The law also formally condemns the regime of the dictator.

Spain's Popular Party (PP), which currently governs Spain, rejected the law, as did the Republican Left of Catalonia (ERC), although both for very different reasons.

The PP argued the law undermined Spain's transition towards democracy while the ERC said the law did not go far enough. 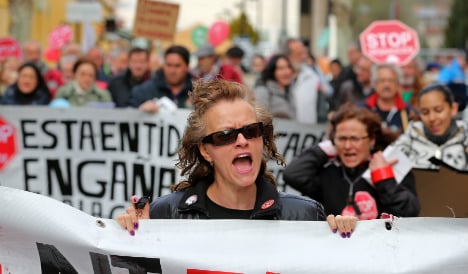