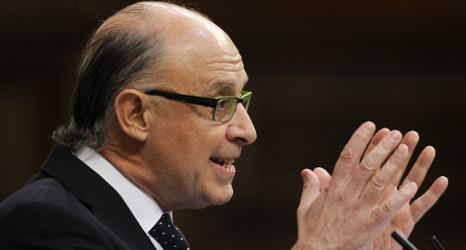 "It is very possible that our economy has touched bottom and that we have reached a turning point," Spain's Budget Minister Cristóbal Montoro said on Monday.Photo: Dani Pozo/AFP

"We are emerging from the crisis," he said, citing a positive current account balance, improved access to international financial markets and easing inflation for the eurozone's fourth-biggest economy.

"The second quarter could be a clear turning point for our economy," after fiscal returns rose in May compared to the month earlier, said Montoro at an economic gathering in Santander, northern Spain.

"It is very possible that our economy has touched bottom and that we have reached a turning point."

Spain has been in recession since 2011, the second such downturn in five years after the collapse of a housing boom in 2008 that has driven the unemployment rate over 27 percent.

"There will be talk of a crisis until jobs stop being destroyed, and we are very close to achieving that," Montoro said.

Spain has received 41 billion euros ($55 billion) from a credit line from its eurozone partners agreed last year to rescue its stricken banks.

After the banking rescue was agreed, Spain was considered close to demanding a full sovereign bailout but resisted and has since seen its borrowing costs ease as market tension over its public finances has relaxed.

The conservative government has imposed tough budget cuts in its aim to reduce the public deficit from seven percent last year to a target of 6.3 percent this year and 5.5 percent in 2014.

"A country like Spain that has not received a bailout has made an enormous financial adjustment that had never been seen before," Montoro said.