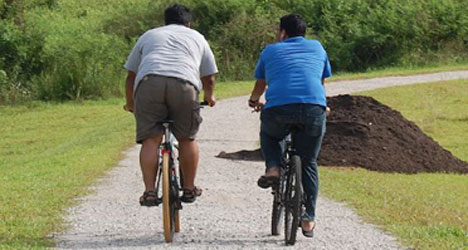 The new saddle adjusts to fit any user and can relieve pressure on sensitive areas. Photo: kodomut/Flickr

The saddle is articulated, allowing flexibility between a narrow, fixed front section and a broad, mobile rear end, according to Spanish daily ABC.

It has been created to comfortably support the bottom and tailbone and can be adjusted to fit users of a wide range of girths.

Alfonso Panchón Ruiz, who led the project at the University's Institute of Applied Physics, Science and Technology, told ABC that the saddle would lighten the load on cyclists' genital areas.

"The main advantage of this design over traditional saddles is that allows the user to rest and recover from fatigue in those areas of the perineum that are compressed for long periods of time, something for which they are not designed," he said.

He added: "The classic bicycle saddle has a stiff, single structure in the anteroposterior (front-to-back) direction that causes the tissues of the perineum, which are soft and not designed to support loads, to become compressed regardless of the position of the rider."

Too much weight pressing down on these soft body parts can lead to chafing and cause nerves and arteries to become compressed during exercise, resulting in a lack of blood flow.

This can cause numbness in the genitals, which Panchón Ruíz described as being a problem for both men and women.

The researchers found that the only two ways to alleviate problems with traditional saddles were to stand up on the pedals or get off the bicycle and discontinue the exercise.

But the new saddle lets riders rest their bottoms while pedalling normally.

"With the new design, the rider doesn't need to get up out of the saddle, it's the saddle which moves by turning or moving below the perineum area," said Panchón Ruíz

In this way it "radically relieves pressure in the area, immediately improving blood flow to the affected parts and allowing tissues to recover".

The development team are confident their design is one-of-a-kind and has significant international commercial potential.

LIFE IN SPAIN
REVEALED: Spain’s most bike-friendly cities in 2022
Url copied to clipboard!