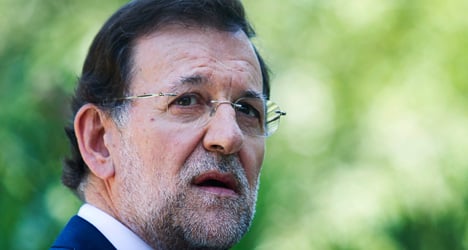 Mariano Rajoy's programme of cuts led to mass protests but has failed to prevent a 15.2 percent surge in public debt. Photo: Jaime Reina/AFP

Spain's public debt surged to 88.2 percent of annual economic output, up by 15.2 percentage points from a year earlier, the central bank said.

Spain, the fourth largest economy in the eurozone, is struggling to trim its annual deficits, so it is continuing to pile on more debt.

The conservative government has vowed to find €150 billion ($195 billion) in savings between 2012 and 2014, a programme that has sparked mass demonstrations in the streets.

But a deep recession has made the task harder, lowering tax income to the state and raising the cost of social security, especially for the unemployed who make up more than 27 percent of the workforce.

Spain's debt level has been pushed higher, too, by the cost of a banking rescue.

Spain has so far used €41.3 billion from a European Union rescue loan of up to €100 billion to prop up banks that have been swamped in bad loans since a decade-long property bubble imploded in 2008.

But that eurozone loan is added directly to the Spanish public debt.

Further complicating the task, Spain's government is forecasting an economic contraction of 1.4 percent this year.

Despite the recession, it has agreed with the European Union to bring the country's annual public deficit below the EU-agreed ceiling of 3.0 percent by 2016.