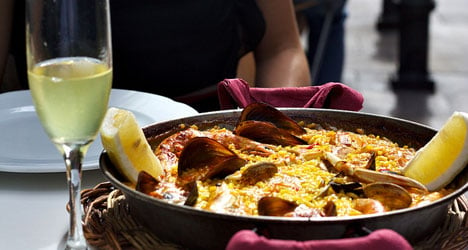 The restaurant owner stated that the couple 'had a lot to drink' before being arrested for assaulting police. Photo: preston.rhea/Flickr

The UK's Daily Mail newspaper ran a feature on the paella incident in which a British couple told of their arrest, imprisonment and fine as a result of an allegedly erroneous restaurant bill.

In the UK article, Geoff Cox and Bridget Keys claimed to have been mistakenly charged €15 ($20) for an extra portion of paella at a restaurant in the southern city of Granada they visited during their recent cycling holiday.

They told reporters that when they offered to pay €105 instead of €120, the waiter "went off like a firecracker."

Police were called and the couple say that they were taken straight to jail before being stripped of their shoes and left without food or water overnight.

"Our services were required in a restaurant because two people didn't want to pay part of their bill," said police spokesman Mariano Valbuena.

"The owner said that he wanted to prosecute the couple so we needed to identify them."

The British pair told police that their documentation was in the hotel so the police ordered them to return to their room to collect their passport in the company of an officer.

According to the police spokesman, that's when problems really started.

Cox is said by police to have lashed out at one officer while his partner kicked another, an incident described by the UK tabloid as "some pushing and shoving".

The couple were then arrested for an attack on law enforcement officers and taken to the police station at 2am.

According to Cox and Keyes, they first found out about the assault charges when they were given access to a translator and a lawyer the morning after their arrest.

The restaurant owner decided eventually not to prosecute the couple but told IDEAL what had happened.

"They had a lot to drink then they went to leave without paying."

The police charges led to a court hearing where the couple avoided custodial sentences but were ordered to pay €78 in fines plus damages of €250.

In the UK press version, the fine came despite the charges being dropped, but Spanish sources say that the charges were dropped because the couple agreed to pay the fine.

The Mail made no mention of the couple's alcohol consumption but quoted Cox as saying, "I'm an ordinary, middle class, respectable citizen who has never had any trouble with the police".

He added: "It's a bloody outrage."

Cox estimates the total cost of the incident, including travel and legal expenses, to be in excess of €700.