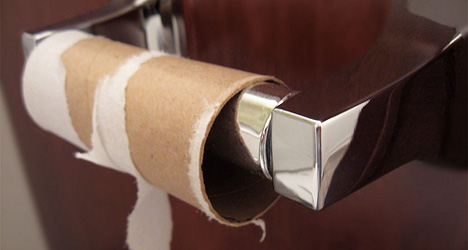 Crimefighters in Cádiz are struggling with a serious toilet paper shortage. Photo: GorillaSushi/Flickr

Officers in the city of Spain were facing the "unsustainable" circumstances of having no toilet paper in their bathrooms, Diario De Cádiz newspaper reported on Friday.

Police union SUP broke the news to media outlets after receiving complaints about barren bathrooms in offices of the provincial headquarters of Spain's National Police force.

Officers at the headquarters have been forced to deploy alternative tactics, including "the use of baths".

After a week of waiting for replacement rolls, officers could hold on no longer and expressed their grievances to union members who contacted the provincial chief commissioner, Juan Carreto Enrique.

The top cop was unable to solve the "uncomfortable situation" and called on Cádiz's Secretary General, Guillermo Moreno, to help clean up the mess.

But according to Francisco Camacho, the police union's local Secretary general, "we still have no toilet paper in our Cádiz facilities".

Camacho could not confirm whether the sticky situation was an isolated problem or if it had spread to other stations in the city.

Official National Police force sources  acknowledged the shortage of toilet paper but stressed that it was a "temporary problem" .

A change in supplier has been blamed for the unsanitary situation.

The contract with the distributor previously in charge of toilet roll logistics was cancelled but the replacement arrangement has yet to be finalized.

One thousand new rolls have been ordered but police may need to wait for up to a month before the delivery arrives.