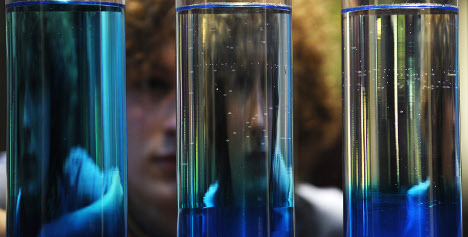 A young man examines and exhibit a 2008 exhibition in Berlin dedicated to the work of German scientist Max Planck. File photo: Michael Gottschalk/DPP/AFP

In a statement the jury commended "the European vocation of the Society, its interdisciplinary approach and the close cooperation among research centres and universities around the world".

The prize has previously gone to the associations including the World Health Organization, the Bill and Melinda Gates Foundation.

"International involvement has a long tradition in the Max Planck Society and has become increasingly important in the past few years," said the president of the society on receiving the award.

"Science always builds bridges. Through the exchange of young researchers and scientists, we aim to foster understanding for the culture and concerns of other countries," added Gruss.

He added that such exchanged laid "the foundations for a scientific collaboration across borders, without which the major problems of humanity cannot be resolved."

But Gruss also sounded words of warning about science in Spain.

"It's very sad," the head of the research was quoted as saying in Spanish daily La Nueva España.

"I know excellent scientists who don't have the necessary conditions to do research, and the worst thing is that many of them have to leave Spain."

The Spaniard Juan Ignacio Cirac Sasturain who heads up the Quantum Optics centre at the Max Planck Society added he felt privileged to work at the centre.

He said it offered the "optimal conditions for research".

In similar news, Spain's Minister for the Economy and competitiveness, Luís De Guindos, on Wednesday defended the decision of the Spanish Government not to award a top home-grown scientists with a scholarship under the country's key Ramón y Cajal programme.

However, he was denied a place on the Ramón y Cajal programme on the grounds that CV wasn't strong enough.

Speaking in the Spanish Parliament on Wednesday, however, De Guindos said the Ramón y Cajal scholarships had been awarded before Santos received the EPS prize.

But the Spanish opposition PSOE party's spokesperson for science Miguel Cortizo said: "The loss of human capital that the current science and technology system is producing is irreparable in the short and medium term".

"In the long term, it will be worse than the Titanic," said Cortizo.

But De Guindos said that it was "great" that foreign researchers came to Spain, and that it was also good that Spanish people left the country.

"You call it brain drain, but that's something different," said De Guindos to his opposition counterpart.

Spain's attitude to science has come under fire recently with Finance Minister De Guindos's claim to have shielded research from cuts meeting widespread rebuttals from the scientific community.