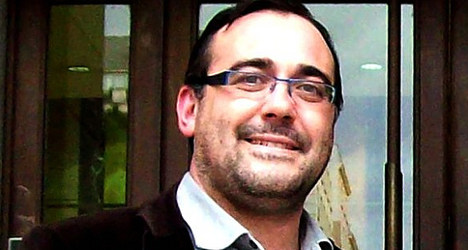 "I spend three hours a day at the school," Noia mayor Rafael García Guerrero told The Local on Thursday.

"My main role is just to be there and supervise the children between classes," said the socialist mayor of the coastal town about 40 kilometres from Santiago de Compostela.

It's really about giving the parents peace of mind."

Guerrero took on the unusual second job after the school's former caretaker resigned at the end of the 2011–2012 school year.

"The situation came about because we are forbidden from hiring anyone else," the mayor of historic Noia explained.

This ban on hiring new staff is part of Spain's sweeping austerity measures, which have seen the budgets of local authorities across the country slashed.

"Now, whenever a municipal worker resigns, or someone goes on leave, we have to fill the post any way we can," said Guerrero.

"The thing is, we have the money. We just can't spend it.

So for now the mayor is acting as caretaker at the school from 5pm to 8pm every evening.

"I don't mind doing it," he told The Local. "The kids play their instruments well and it's quite pleasant."

But Guerrero also said that the situation in Noia showed "the current system isn't working".

"I also don't envisage things changing any time soon," he told The Local.