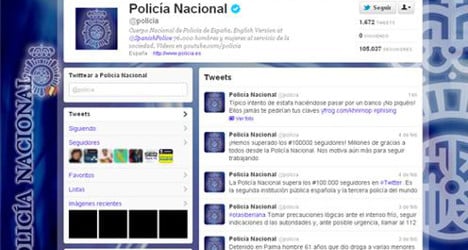 Police say they have arrested 300 suspected drug traffickers since January 2012 thanks to information provided by Twitter users. Photo: Twitter screenshot

Since it was set up four years ago, the Spanish feed has become one of most popular police Twitter accounts in the world, with the force regularly sending humorous tweets to attract followers.

As well as warning the public of new scams, the force often enlists the help of Spaniards, tweeting requests for information about drug dealers in particular, to be sent anonymously to a police e-mail address.

"If you know of anybody, a little group of narcos, or of a drugs sales point in Spain, tell us at [email protected]#CONFIDENTIAL, we will get them," ran a recent tweet.

Police say they have arrested 300 suspected drug traffickers since January 2012 thanks to information provided by Twitter users in response to these appeals for help.

"They provide us with a lot of really useful information. It is very powerful feedback for us," explained the force's social media manager, Carlos Fernandez Guerra, as he sat at his desk, regularly checking his iPhone and iPad.

"They are very useful stories which have absolutely revolutionized how police operate in Spain and in many other regions of the world that use us as a reference," the 39-year-old, dressed casually in jeans and a brown blazer, said.

Police representatives from Latin America, South Korea, Tunisia and Morocco have all visited to learn from Spain's experience, said Guerra.

The Spanish force initially opened its Twitter account in March 2009 as a means to communicate with the press.

But the number of followers exploded after a new social media-savvy director took the helm of Spain's national police in January 2012 and ordered the press department to develop content for the Twitter feed that would appeal to the general public.

The police feed just recently passed the half a million mark, with 500,362 Twitter followers — more than any other police force in the world except for the FBI, whose followers number more than 618,000.

They received a tweet from the US governmental agency which read: "Congrats on your half million followers. The greatest weapon against crime is the cooperation of the citizens we serve."

'A different vision of police'

Using social media to fight crime has given the police a new, direct link with the Spanish people who have in turn started to view the cops in a different light.

"What have police gained with their Twitter account? Undoubtably a capacity to influence and reach the public which they never had before," said Enrique Dans, a professor of information systems at the IE Business School in Madrid.

"It has also generated a different vision of police which can lead people to work more closely and in a more friendly way with police. It is already happening."

In certain cases, police calls for help have been retweeted thousands of times, with an enthusiastic public keen to play its part in fighting crime.

In 2012, a police tweet asking people to be on the lookout for a Chinese man suspected of stabbing to death a family of four in England who was believed to have fled to Spain was retweeted over 5,000 times.

The man, Anxiang Du, was arrested in Morocco and extradited to Britain where he is facing trial later this year.

The most popular message from the Spanish force, retweeted over 10,000 times, was sent out on July 1, 2012 — a night of nationwide celebrations at Spain's victory in the Euro 2012 football championship — asking for volunteers equipped with chainsaws and tractors to help put out a wildfire raging near the eastern town of Carlet.

"It is incredible that, during that moment of euphoria, people had time to show their solidarity and retweet the message and mobilize to help a town that was going through a hard time because of a wildfire," said Guerra.

On a less dramatic scale, police use Twitter to inform the public about police operations, warn about scams and issue public safety messages, such as reminders to avoid drink driving.

"Those 'cool' gin and tonics with fruit, vegetables and flowers… you pay but they are so trendy! BE CAREFUL: If you drive after drinking them you will pay heavily," police wrote in a recent tweet marked as a favorite by hundreds of Twitter followers.

Police use a mix of humor and street talk to keep the tone of their 140-character messages light-hearted.

"We try not to be very boring or too institutional or else people lose interest," said Guerra.

Guerra, who is not a policeman, manages a team of six younger police officers with university degrees in areas as diverse as psychology and sociology who manage the Twitter account, as well as police pages on other social media sites.

Aside from writing tweets, the unit answers the hundreds of messages police receive via Twitter, generally through private messages.

"We get mostly questions from parents who are worried about the safety of their children, a lot of questions about what is a crime on the Internet," said unit member Elisa Rebolo, 32.

"Before people would approach a police station or call. This is probably a more direct way to relate to them," she said.