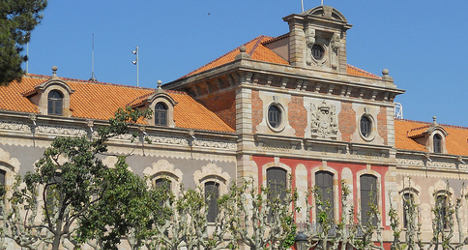 The Parliament of Catalonia in Barcelona: the region wants deficit targets raised above the levels set by Madrid. Photo: Jason Paris/Flickr

Madrid wants the country's 17 regions, which are responsible for providing healthcare and education services, to lower their budget deficit to 1.2 percent of gross domestic product this year from an average of 1.7 percent last year.

The reduction is crucial to Spain's campaign to lower the nation's overall public deficit and meet targets agreed with Brussels.

But Catalonia has yet to present a 2013 budget and Catalan president Artur Mas said Tuesday his government would not be able to table one unless Madrid raises the deficit limit.

"If we prepare a budget based on the figure which Madrid has given us, it would mean the end of the welfare state in Catalonia," he said.

Catalonia, which accounts for one-fifth of Spain's output, has already slashed its budget deficit from 4.57 percent in 2010 to 1.96 percent.

Anger at slashed budgets for hospitals, schools and social welfare has revived the independence movement in the region, which has its own distinct language and culture and accounts for about one-fifth of Spain's output.

Mas, of the nationalist Convergence and Union alliance, warned that Catalonia "is reaching the limit of its efforts when it comes to austerity."

The Catalan government also argues that deficit targets should be adapted to each region's circumstances instead of the current limit set for all.

Spain's central government imposed a deficit limit of 1.5 percent for all regions last year but the result was far from uniform with some regions meeting the threshold and others falling far short.

The eastern region of Valencia for example ended 2012 with a budget deficit of 3.52 percent while Castilla–La Mancha lowered its deficit to 1.5 percent.