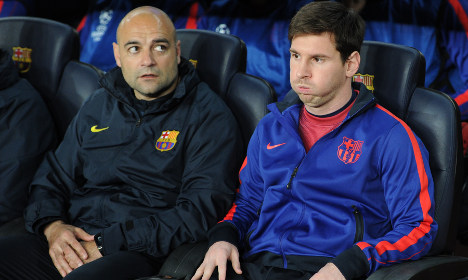 "We are surprised about those news, because we have never committed any infringement," the Argentine player said in an English-language statement released on his Facebook account.

"We have always fulfilled all our tax obligations, following the advices of our tax consultants who will take care of clarifying this situation."

The court in Catalonia, where Messi is resident, could yet refuse to let the complaint proceed, the source said.

But if it were to proceed, it could be a huge blow to the prestige of the four-time World Player of the Year, who has long been seen as a more humble figure than most top-class footballers and particularly his Real Madrid rival Cristiano Ronaldo.

Messi's achievements on the field have made him one of the most marketable sportsmen in the world,  however.

Indeed, the 25-year-old was ranked 10th among Forbes' list of sports star's incomes this month with an annual $ 21 million from endorsements alone.

FC Barcelona declined to comment but said Messi's lawyers would be issuing a statement.

The player and his father are accused of three crimes of defrauding the state of taxes related to income from the use of his image in 2006, 2007, 2008 and 2009, Spanish media said, citing a written copy of the filing.

The striker and his father allegedly avoided taxes on money they raked in from the use of the global star's image in countries such as Britain and Switzerland.

That money allegedly went straight to companies based in tax havens such as Belize and Uruguay.

Messi allegedly ceded his image rights to those companies so as to avoid tax, and he and his father acted with "total opaqueness" towards the Spanish authorities, the written filing reportedly said.

The father is accused of being the brains behind the scheme, allegedly setting it up in 2005 before his son turned 18 on June 24 of that year, Spanish media said.

The prosecutor alleged that Messi later agreed with his father's tactics so that he would avoid any taxes on income from the use of his image rights between 2006 and 2009.