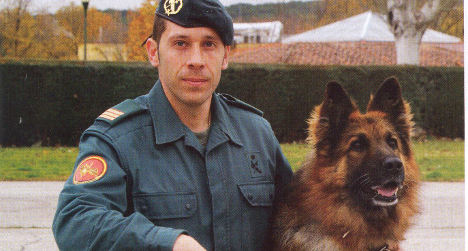 The Spanish Civil Guard dog named Ajax will be honoured on Tuesday with a Gold Medal by the UK animal charity the People's Dispensary for Sick Animals (PDSA).

"The PDSA Gold Medal is recognized as the animals’ George Cross and it is the highest honour for ‘civilian’ bravery," Jessica Richardson of the PDSA told The Local.

It is awarded to animals that are instrumental in saving human or animal life when its own life is in jeopardy, or through outstanding devotion to duty.

"Our awards are based on nominations, which are then carefully assessed," Richardson explained.

"We give out awards most years, but sometimes there are no worthy candidates."

Only 21 dogs have received the prestigious prize to date. Ajax is the first Spanish dog to be awarded, and only the second from outside the UK.

The 10-year-old explosives search dog Ajax will receive the medal at a ceremony in Madrid, in the presence of his handler, Sergeant Juan Carlos Alabarces Muñoz.

The dog will receive the award for his role in detecting ETA bombs on the Spanish island of Majorca in July 2009.

On July 30th 2009, a terrorist attack took place near a Guardia Civil station in Palma Nova, Majorca, days before the King’s annual visit to the island.

Suspecting further attacks, Sergeant Alabarces Muñoz and other Civil Guards were assigned to help in the search and were sent to the Civil Guard barracks in Palma Nova.

Ajax soon found a concealed bomb that had been carefully attached to the underside of a vehicle near the barracks.

The area was evacuated and a controlled explosion of the bomb was carried out successfully. The shrapnel scattered over an area of 100 metres.

"If Ajax had touched any part of the bomb, he would have activated its motion sensor and been killed along with myself and everyone else within range of the bomb," he explained.

Several hours later, Ajax uncovered another bomb under a vehicle in the same area.

"The bomb was planted specifically to kill or injure those rescuing the casualties from the first explosion. The targeted vehicle was parked on a public road, close to several hotels. If Ajax had not found the bomb in time, the outcome would have been tragic," said Alabarces Muñoz.

"Ajax and I have worked together for over nine years – we’re partners and we understand each other very well," said Alabarces Muñoz

"This strong relationship means that even with one small look or signal from him I know straight away that he is telling me something," said the handler of Ajax.

"It is wonderful to see his actions rewarded with the PDSA Gold Medal – there is no other medal quite like this which truly recognizes and honours the role of animals in society.”

Commenting on Ajax’s actions, PDSA Director General, Jan McLoughlin, said: “Ajax is a most worthy recipient of the PDSA Gold Medal, which acknowledges extreme acts of courage and dedication in civilian situations. His actions on that day, in the terrifying aftermath of the first bombing, undoubtedly saved many lives.

“He now joins an elite group of the world’s most courageous animals.”