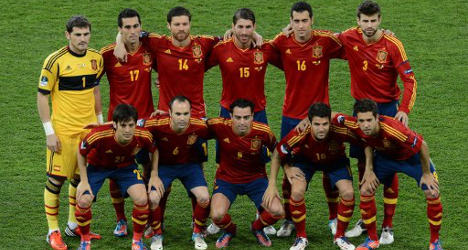 Spain's Euro 2012 triumph in Poland and Ukraine was achieved with Cesc Fabregas playing an auxiliary role as the attacker furthest up the field but he remains much more of a natural midfielder despite his re-incarnation as a "false nine" at international level.

For the Confederations Cup, manager Vicente del Bosque has four clear options whether he decides to go with a "false nine" or indeed a more traditional centre-forward.

Alongside Fabregas, he has selected the experience of David Villa and Fernando Torres, whilst Roberto Soldado's late season form saw him edge out Alvaro Negredo, who had been selected ahead of the Valencia man for the World Cup qualifying double-header back in March.

Del Bosque's loyalty to Torres and Villa is understandable as they have tended to be been the focal point of Spain's success over the last five years.

Villa was the competition's top-scorer at both the European Championships in 2008 and World Cup in 2010, whilst in Villa's absence through injury, Torres scored the winner in the Euro 2008 final and remarkably finished joint top-scorer in last year's Euros, despite only starting twice and scoring three times.

However, neither have enjoyed the best of fortunes at club level over the past couple of years.

Villa has struggled to regain his place in the Barcelona side after breaking his tibia in December 2011 and with Neymar joining the Spanish champions, he seems almost certain to be on his way out of the Catalan capital in the coming months.

Meanwhile, although Torres has regained some semblance of form as his 22 goals helped Chelsea win the Europa League, those goals came from 64 appearances and only eight came in the Premier League.

Without doubt the man most in form is Soldado. The Valencia captain scored 30 goals in all competitions this season and 10 in the last eight games of the campaign as he tried to almost single-handedly drag them back into the Champions League.

However, Del Bosque has been reticent to use Soldado in the past.

The 28-year-old was left out of the Euro 2012 squad, despite scoring a hat-trick against Venezuela in a warm-up friendly and has not featured in any of Spain's World Cup qualifiers since scoring the only goal in a 1-0 win away to Georgia to begin their campaign.

Soldado's problem seems to be that Del Bosque does not believe he has the all-round game to combine with Spain's multitude of creative midfielders.

"We can play with a genuine number nine or a different kind of player but we need players who can contribute to the team play and be effective throughout the match and not only to score a goal" the 62-year-old said last week.

That would suggest Fabregas remains the favourite to start amongst the frontline, however with opponents now more than happy to gift Spain possession, confident there will be little threat in behind, that is likely to prove problematic against better opposition.

Eventually, it seems Del Bosque will have to turn to a real number nine but his likelihood to choose loyalty in Villa and Torres over the form of Soldado is another chink of light for those hoping to knock Spain off their perch.