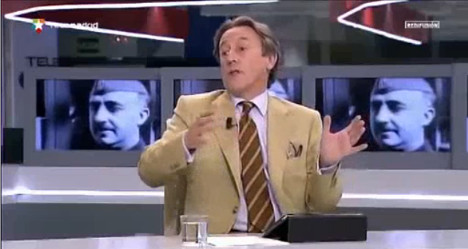 Herman Tertsch, who was in the middle of singing Aznar’s praises, caught a glimpse of what was being shown behind him and lost his concentration. Photo: YouTube

News presenter Ana Samboal was talking to journalist Hermann Tertsch on Telemadrid’s Diario de la Noche programme when the controversial footage appeared on the screens behind him.

ABC newspaper and Telemadrid journalist Herman Tertsch was in the middle of singing Aznar's praises when he caught a glimpse of what was being shown and lost his concentration.

Aznar, Prime Minister of Spain from 1996 to 2004, has been in the news recently after hinting at a possible return to politics and criticizing his successor and current Spanish leader Mariano Rajoy.

Franco was Spain's dictator from the end of the country's civil war in 1939 until his death in 1975.

It is not clear if the Franco footage shown on Telemadrid was, however, a reference to Aznar's right-wing pedigree or a direct attack on Tertsch.

“I’m aware of all the attacks of those who no longer work here. There are people with so much bitterness I have no idea what will come next.”

Tertsch was referring to the nearly 900 Telemadrid employees who have been laid off by the state-run company to avoid insolvency.

With regard to the hostility the former TV station workers hold towards Tertsch, it’s probably down to a comment he made in 2010.

“Having a workforce that’s packed full of Bolsheviks is not only ridiculous in a region where most people have liberal and conservative views, it’s downright dangerous.”

After the show, the controversial columnist asked for an explanation of what had happened.

The show's organizers told Tertsch they were planning to show footage of Spain's transition, starting with the Franco era.

It's not the first time the journalist has complained about feeling persecuted, having filed a lawsuit against satirical news programme El Intermedio after they mocked him.