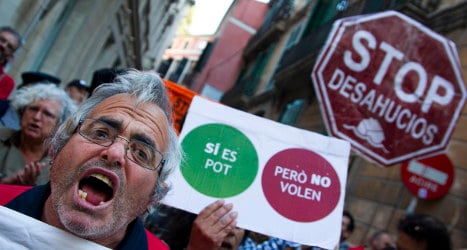 The report's authors want to put a stop to a situation where evicted families have to keep repaying their mortgage. Photo: Jaime Reina/AFP

The report's authors also want to put a stop to a situation where “evicted families have to keep repaying their mortgage".

Put together by Karima Delli of the Europe Ecology–The Greens party, the report is to go before the European Parliament for approval on Tuesday.

The report has no legal standing but if Brussels does sign off on it, this could add to the pressure on Madrid to change its current mortgage system.

This pressure mounted last week when  Brussels announced on June 6th that Spain's anti-evictions lobby, the PAH, was to receive a European Citizens' prize for its work in "fighting for European values".

The group, headed by Barcelona activist Ada Colau, defends people in Spain who are facing forced evictions from their homes because of an inability to meet their mortgage payments.

They have collected over 1.5 million signatures as part of their campaign to see evicted homeowners in Spain freed of their outstanding mortgage debts.

At present, many of the homeowners who have been evicted from their property in Spain are still required to pay off the remainder of their mortgage.

Current laws in Spain allow for this debt to be cancelled as long as creditors and debtors have made a prior agreement.

Changes brought in in March also mean the country's judges have discretionary powers to stop evictions if they believe any of the clauses in the mortgage contract are "abusive".