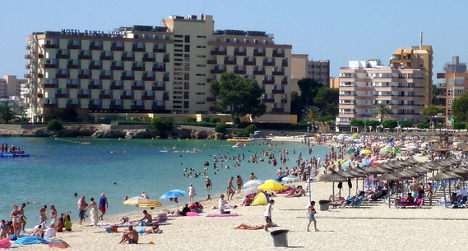 The 24-year-old Sean Patrick K. was taken to the island's Son Espases hospital with serious injuries to the head, and to the rest of his body, the Diario de Mallorca newspaper reported on Friday.

He sustained the injuries early on Thursday morning when he climbed out of a window at the Magaluf Playa apartments and tried to jump onto a neighbouring balcony, the paper reported.

He fell onto a canopy below and firemen were needed to rescue him.

The Diario de Mallorca described the young man as the latest victim of a trend known as 'balconing'.

Balconing usually involves either jumping from one balcony to another leaping from a balcony into a hotel swimming pool.

There have been a number of deaths related the practice, mostly involving British and German tourists.

A member of staff at the Magaluf Playa apartments where the incident occurred said the hotel took no responsibility.

"The man wanted to jump out of the window to a balcony when he fell. There's not much we can do about it," the staff member said.

He said the balconing trend was uncontrollable.

The man also said the victim had arrived Majorca with friends only hours before the incident.