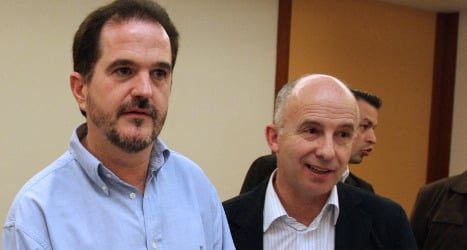 Carlos Iturgaiz (left), a Eurodeputy for Spain's governing Popular Party, said his party would look at having the prize withdrawn. Photo: Pedro Rey/AFP

The PAH received the European Citizens prize for its work in "fighting for European values".

The anti-evictions lobby, headed up by Barcelona activist Ada Colau, defends people in Spain who are facing forced evictions from their homes because of an ability to meet their mortgage payments.

But  Popular Party (PP) Eurodeputy Carlos Iturgaiz reacted to the announcement of the prize by calling it "a real scandal".

He told news agency Efe that the PP was "against" the awarding of the prize to the group.

Iturgaiz labelled the PAH a "violent organization" and said his party would look at whether it might be possible to see the  lobby group's European Citizens' prize withdrawn.

The tactics of the PAH have previously raised controversy in Spain.

Most controversially, the group have made use of so-called "escraches" which have seen involve the direct targeting of politicians' homes and offices to put greater pressure on them to change policies.

In Spain, the protests have seen demonstators chanting slogans outside the offices and home of PP politicians.

Speaking on Thursday, Iturgaiz  said the PP would now also ask for a change in the rules governing the granting of the prize.

"We're sorry that the only Spaniard on the jury (Barón Crespo) wasn't brave enough to recognize that the violent acts of this organization (the PAH) don't correspond to the value of this prize;" Iturgaiz told Efe.

The Spanish delegation of the PP in the European Parliament was "in agreement with the objectives, but not the methods" of the PAH, Iturgaiz added.

But PAH spokesperson Ada Colau said the prize was "especially important" at this moment  when the PP was choosing not to heed the petitions presented by the lobby group.

"The PP is trying to divert attention from the problem of home evictions with a campaign designed to discredit and criminalize the PAH, calling us Nazis and terrorists, Colau told Efe.