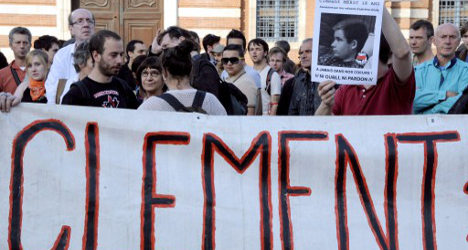 Clement Meric, 18, a student at Paris’s Sciences-Po university, died on Thursday after an attack near the city's central Saint-Lazare railway station.

Spanish media are quoting French newspaper Le Point which have reported one of the suspects is Esteban M., a Spanish national born in 1992.

He was arrested along with three others, including a 32-year-old woman.

A police source said the four had been held for questioning, adding that the attacker thought to have dealt the fatal blow said he did not intend to kill.

Spanish media are reporting that this was Esteban M., a known skinhead.

Another source later said all suspects had links to far-right groups.

Meric's peers and former teachers described him as a model student with a strong social conscience.

"He was someone who was firm in his beliefs but not aggressive," said fellow student and activist Raphaelle Remy-Lele.

Hundreds meanwhile gathered on Thursday to pay tribute to Maric at the Sciences-Po and the site of the violence.

Many shouted a slogan in Spanish "They Shall Not Pass" — used to express determination to defend a position against an enemy.

French politicians across the spectrum condemned the incident, with some calling for the government to ban groups they say are becoming increasingly violent and brazen in their actions.

Far-right groups have been blamed for violent clashes that marred a number of recent protests over France's legalisation of gay marriage.

The country's interior minister Manuel Valls said the tragedy "bears the marks of the far-right", while President Francois Hollande sent his "support and solidarity" to the family of the victim.

Reports diverge on what sparked the fight outside a shop that sold clothes popular with far-right activists and skinheads near the train station.

Police said a group of young "skinhead types" found themselves in the shop with another group that included Meric, sparking a wave of insults and jostling.

The skinheads then left the shop and waited for the group outside with other people, and the victim "was hit by one of the skinheads who wore a knuckleduster and fell on the pavement, hitting a bollard."

A police source said the victim was involved in the "extreme-left anti-fascist movement."

One witness who wished to remain anonymous told AFP she was leaving work when she saw the tail-end of the fight.

"Lots of people were running in every direction and as the young people with shaved heads looked like they were leaving, they came back and suddenly a punch was thrown and the young man fell against the bollard," she said.

"Afterwards, I looked after the victim who had blood flowing from his ear and nose."

But Serge Ayoub, the leader of the JNR nicknamed "Batskin", said his group was not involved in the incident, adding that the far-left activists were the ones who left the shop first and waited for the skinheads, sparking the fight.

The violence in the heart of the popular shopping district of Paris has shocked the city.

Marine Le Pen, head of the far right National Front, said her party had "no link" with the "horrendous" incident.

Left-wing parties — including France's ruling Socialists — called for people to rally in Paris early on Thursday evening for "the dissolution of ultra violent far-right groups".

On Twitter, the incident was one of the most talked about topics in France, with the name of the victim, JNR and #antifa, short for anti-fascist, all trending on the social network.