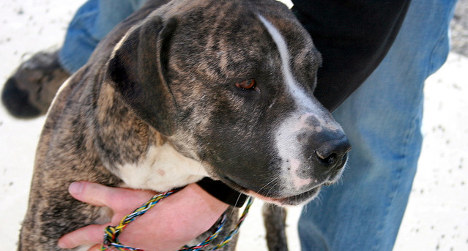 All three children bitten have now been vaccinated against rabies, a deadly disease among humans if not treated in time. Photo: Maplegirlie/Flickr

Castilla y La Mancha’s Health and Social affairs council told Spanish news agency Efe that vets in the region have confirmed the dog is infected with the viral disease.

The pedigree dog was not on a leash nor was it wearing a muzzle when it first attacked a six-year-old girl and then a twelve-year-old boy, causing them both minor injuries.

But it was a two-year-old boy in a local park who suffered the worst injuries after the enraged animal bit him in the face.

The child was rushed to hospital to be operated on immediately and still remains in intensive care.

All three children bitten have now been vaccinated against rabies, a deadly disease among humans if not treated in time.

Another 17-year-old boy was bitten by the infected dog, although there is nothing to suggest that the teenager has contracted the fatal disease.

Efe sources reported that the pit bull’s owner bought the animal from a supplier in Barcelona.

Given that the incubation period for rabies is a month and the animal had only recently made it onto Spanish soil, experts believe the pit bull probably picked up rabies in North Africa.

The region's Agriculture department is currently conducting a thorough investigation to ascertain where the dog has been over the past six months.

Spain has been a rabies-free country since 1975, but its north African enclaves of Ceuta and Melilla have still registered the occasional incidents in recent years.

"If visitors are bitten, scratched, or licked by a wild or domestic animal they should was the wound thoroughly with soap and water and urgently seek medical advice either in Spain, or on their return from their GP or NHS 111," said Dr Hilary Kirkbride, a rabies expert at the UK healthy agency.