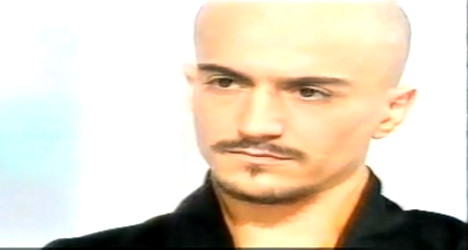 “He had a very intimidating, piercing gaze,” one of his pupils told the Spanish national daily, also making reference to his mystical and spiritual tendencies. Photo: YouTube

Aguilar, a Shaolin master well known for being the first Westerner to reach such a high level of the martial art, admitted to having tortured and murdered a woman when questioned by police on Monday .

Basque Ertzaintza police had already found bone remains in plastic bags at Aguilar’s martial arts gym, now confirmed to be human, confirming their initial suspicions that other women could have been his victims.

Investigators have also undertaken searches for body parts in the aggressor’s home and in the Basque capital’s estuary after Aguilar, who has had a brain tumour for the past two years, told police he had dropped some his victim’s remains in the bay.

It is still to be confirmed whether Aguilar was following any treatment for his psychological problems.

Although he did have a police record, there was no indication he would carry out such brutal attacks on women.

His pupils remember him describing himself as “a representative of Buddha on earth”, El País reported.

“He had a very intimidating, piercing gaze,” one of his pupils told the Spanish national daily, also making reference to his mystical and spiritual tendencies.

Another apprentice commented on his obsession with Zen culture and how he almost always wore typical orange Buddhist clothing.

“He was completely barmy but I never expected him to do something like that, especially considering how spiritual he was,” she told El País.

Aguilar, three times Kung-fu world champion, taught a vast array of martial arts and meditation techniques to pupils from Spain and overseas at his Bilbao gym, decorated like a Buddhist temple.