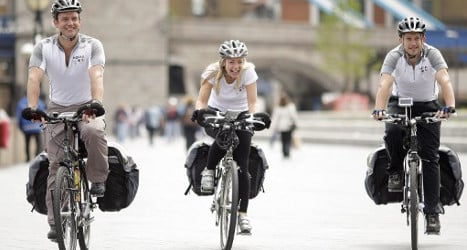 At present, the wearing of bicycle helmets is only compulsory on roads that connect Spain's towns and cities. However, a new draft traffic code — which will also see maximum speeds on some of the nation’s roads boosted from 120 km to 130km — is set to change all that.

If the new rules are passed, bike helmets will also become compulsory for cyclists in Spain’s cities.

This is the “most effective” to reduce serious incidents said María Segui, the Director-General of Traffic recently.

"I have no doubts in terms of the beneficial effect (of wearing helmets) and no organization has denied that using helmets prevents accidents," the traffic chief added.

It may seem difficult to argue against such logic, especially given that number of injuries to bicycle riders has soared in recent years.

Figures from Spain’s Traffic Directorate for 2011 show that non-serious injuries to bike riders on Spain’s city urban and interurban roads all but doubled to 4,301 in the six years from 2005.

Serious injuries, meanwhile, were up nearly a third in the same period — from 448 to 549. And around half of those incidents occurred on city streets.

However, there has been widespread opposition to the proposed rule change and not, as might be expected, along political lines.

"This is one of the few Spanish debates that is taking place away from the ideological trenches," journalist Igancio Camacho wrote in the country’s ABC newspaper on Thursday.

He pointed out that most debates in the country — ranging from that on bullfighting or euthanasia or tobacco use — are conducted from a pre-existing positions. But not the bicycle helmet issue.

"This debate is not as trivial as it seems," he wrote. "All you need to do is pay look at social media or keep an ear out on the street or in bars and offices and you’ll see that this is a subject that raising enormous interest".

The opposition to the rule change comes from diverse camps but one of the most important sources of opposition is the city’s town halls.

Madrid town hall released a statement recently saying: "It isn't possible to demand that people where helmets in a country where bicycles are an important mode of transport”.

Any such imposition "would negatively affect a public hire system of bicycles as well private bicycles," said the local authority in a statement on the issue.

Spain needed to pursue policies to "promote the use of bicycles," the official added.

In a similar vein, the Network of Cities for Bicycles argues: "It has been proven that the more cyclists there are, the safer (the streets) are, therefore we have to introduce policies that promote the use of bicycles."

The group wants to maintain the status quo, with the wearing of helmets being "recommended" but not compulsory on city streets.

Meanwhile, the cycling lobby Bicicultura argues that making people wear helmets is looking at the problem the wrong way around.

The group argues that the most serious accidents take place when vehicles with motors hit bicycles. The answer, therefore is to "improve road design to make traffic conditions safer".

Transport laws need to ensure that bicycles have a problem place on the road and not focus on the "discriminatory imposition" of the use of 'armour'," the lobby say.

At the more extreme end of the spectrum, Spain’s Party for Individual Liberty (P-Lib) issued a statement saying that while they could "see the benefits" of helmets, they were against a regime where people could be fined for not wearing them.

The group also argue that the number of bicycle accidents in recent years isn't caused by a lack of helmets but by an increased use of this mode of transport.

But the Director of National Transplants Organization (ONT) Rafael Matesanz says he is "stupefied" by the controversy over the new traffic rule.

In a letter to El País newspaper published on Sunday, Matesanz  wrote: "I have spent 25 years watching how cyclists all over Spain die from head trauma and end up being organ donors."

People who argued against wearing bicycle helmets in cities were like urban taxi drivers who say they don’t need seat belts because they are always in their car, the ONT director said.