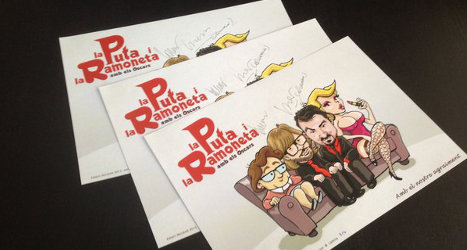 The Catalan card's name could be literally translated as the whore and little Ramona. Photo: Verkami

Federalists are people who support the current state of affairs where Catalonia is an autonomous province within Spain.

The three-to-six-player game is called La Puta y La Ramoneta, a name which stems from a Catalan expression meaning to bluff and call one's bluff.

Card players have to defend their views on Catalonia's culture, economy and laws by negotiating, creating political alliances and outwitting their opponents in an exchange or cards and questions.

The satirical card game is made of up of cards with a series of caricatures of famous Catalan politicians from the past decade.

"We wanted to promote a game that allows people to come together face to face rather than through a computer screen for a change," Marq Miquel, one of the game’s creators, told Catalan daily La Vanguardia.

The young entrepreneurs' objective is to have all of Spain bluffing and calling each other's bluff, instead of it just being the country's politicians.

They're promoting the game through crowdfunding website Verkami along with the company Catalan Games to raise the €4,000 to put La Puta y La Ramoneta into circulation.

"The game will expire once Catalonia becomes independent because this political bluff game has to stop," said Miquel.