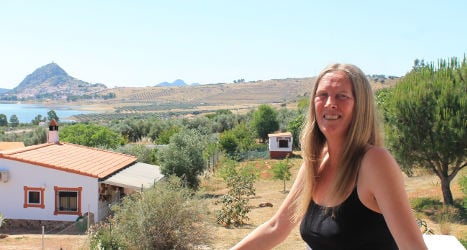 "In our village you are more likely to see men driving mules than driving cars," says Extremadura resident Sue Sharpe, pictured here on her balcony.

My partner and I came moved here six years ago. We both had reasonable jobs in the UK but life there was so expensive and we were growing tired of the daily grind in southern England.

Also, my partner Phil had always been keen on living in Spain and I thought, why not? It could be fun.

And why did you choose Extremadura? It’s not the usual choice.

Well, the strange thing is, we’d been on holiday to Mexico, and as part of our trip, we visited a lot of Mayan ruins. Anyway, while we were there we ended up learning quite a lot about the Spanish conquistadors like Hernán Cortés and Pizarro, both of whom originally came from Extremadura — Cortés from Medellin, and Pizarro from Trujillo.

So when we decided to come and take a look at where we might live in Spain, we chose Extremadura as a first stop. We flew out and hired a car and within three days we thought: "Oh yes. This is the place."

I hate it when people harp on about the “real” Spain or the “authentic” Spain but we were happy to be in a place where no one spoke English and which wasn't too developed. In our village of Alange you are more likely to see a man driving mules than a man driving a car.

There’s also so much wide open space here. You can lose yourself. And quite a few people do!

Extremadura can get very cold. How was your first winter?

We had made quite a few trips out before we came — you can never do enough research after all — but nothing could prepare us for that first winter. At that stage, we only had an open fire but having come from Surrey in southern England where everything is on tap, we thought it would be easy to get firewood.

That wasn't the case. Our neighbours had olive groves and they burnt that wood, but they needed it for themselves. We ended up choosing bits of furniture we didn't like and throwing it onto the fire.

How did the locals react to the arrival of their strange new neighbours?

When I first came here, my Spanish was very poor, and me being a reserved Brit, my main fear was offending people. I survived by smiling a lot for the first two years, but didn't really interact much beyond that.

But the people here were amazing. The locals really helped us with advice on how to source building materials.

You take a chance when you move somewhere, but we have been very fortunate. Our nearest neighbours have adopted us. When they have a family celebration they invite us and we are like their British aunt and uncle.

We also have plenty of Spanish friends now and we join in the local fiestas.

What are the highlights of the village calendar?

The biggest one is the Carnival in January. The village has two teams that make carnival floats and there’s a lot of competition between them to make the best ones. Last year, both teams took their floats to Badajoz to participate in the big competition there which is shown on local television over four or five days. There’s a lot of pride at stake!

Where do you take visitors?

We always go to the Roman theatre in Merida. Merida has more Roman ruins than any other city in Spain. Then if we have time, we take a trip to Trujillo. With its market square and monuments and restaurants, Trujillo is truly jaw-dropping.

Caceres is amazing too, but I don't get there as often as I'd like to.

And what about Extremadura’s amazing food?

Where to start? Extremadura is rightly famous for its food. There’s the torta de Casar which is a lovely goats’ or sheep cheese made with thistle. And of course I have to mention the migas, (a dish made of breadcrumbs).

The first Friday in February is the annual Migas festival in the village. They build a bonfire a huge bonfire and families, or football clubs, or teams gather together to see who can make the best migas. The town hall provides olive oil and wine and the mayor votes on which is the best.

All the fiestas here get 100 percent support!

One final question: you arrived at the beginning of the crisis. Have you noticed any changes?

All of the land here is farm land, and a lot of people are in a lot of trouble. We had one friend, for instance, who raised pigs until it got to the point where he spent more on raising the pigs than he got for selling them on the market. Now he’s making goats cheese to get by.

But this is a small community and the people are pulling together. The church also plays a role in helping poorer families. When people go shopping they buy extra groceries and pass them on the church for redistribution.

The mayor is trying to his bit too by spreading the work around as much as possible. The individuals cleaners and gardeners might not have any more hours, but more people are taking home some money.

Sue's entertaining blog about life in Alange and beyond can be found here.