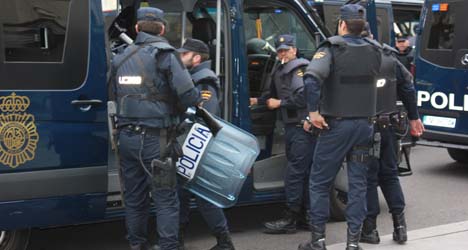 “A lot of this kit is only guaranteed to be effective for ten years, so the investment has to be made again,” a police union spokesperson told The Local. Photo: Alex Dunham

Spain’s national police, responsible for dealing with high-risk situations like armed robberies and attacks, are having to reach deep into their own pockets to protect themselves from any potential harmful incident.

“On average each national policeman has to pay €1,000 for bullet-proof vests, slash resistant gloves and other equipment that can be the difference between life and death,” José María Benito Celador, spokesperson for Unified Police Union SUP, told The Local.

“A lot of this kit is only guaranteed to be effective for ten years, so the investment has to be made again.”

SUP has warned that only half of Spain’s national police force have their own slash resistant gloves and even fewer are equipped with bullet proof vests.

Other routine equipment like boots, torches, holsters and new uniforms usually have to be paid for by each individual policeman before he can go on patrol.

Police sources have told Spanish media that a lot of the equipment officers are given is in disrepair, with the situation only worsening during these times of crisis.

“The government has to invest in the safety of the people who are fighting to protect Spanish citizens,” Celador told The Local.

“Other police forces like the local police, who don’t have to deal with such dangerous situations, get their funding from regional governments and are far better equipped, and paid, than Spain’s national police.