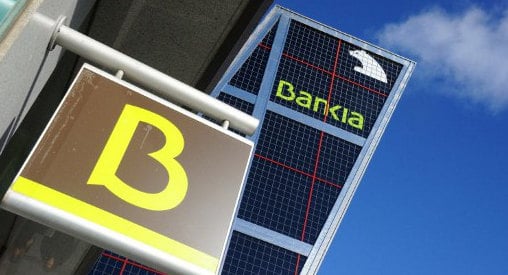 Spain has so far used 41.3 billion euros ($54 billion) from a European Union rescue loan of up to 100 billion euros to prop up banks that have been swamped in bad loans since a decade-long property bubble imploded in 2008.

The European Commission, which sent a team of experts on a 10-day trip to Spain ending May 31 to check how the rescue is going, said the restructuring of the Spanish banks was "well underway".

Compliance with the original rescue loan agreement last year "is nearly complete", the Commission said in a joint memo with the European Central Bank.

Spain enjoys lower borrowing costs on the bond markets and the liquidity of the Spanish banks has improved as their balance sheets are recapitalized and impaired assets are transferred to a "bad bank", Sareb, it said.

However, debt-laden Spanish businesses and a sliding real estate market "continue to severely affect lending volumes and to impact the asset quality of the Spanish banking sector," it added.

"Vigilance is required to help ensure that these positive trends in the stabilization of the Spanish financial sector can be maintained."

The European Commission and ECB said it was "essential" that burden-sharing measures were completed, a reference to Brussels' insistence that private investors in Spanish banks share in the cost of the bank rescue.

Such "burden sharing" is highly sensitive in Spain, where many customers say they were misled into pouring their savings into preferred shares issued by their banks, which assured them their money was safe.

The International Monetary Fund, which also sent a team to Spain so as to provide independent monitoring, agreed in a separate statement that the Spanish banking rescue was "on track".

"Nevertheless, risks to the economy and hence to the financial sector remain elevated as Spain continues to undergo a difficult process of correcting large pre-crisis imbalances," it added.

Moody's Investors Service warned last month it was keeping a "negative" outlook on the Spanish banking industry, saying it expected the banks' assets to deteriorate over the next 18 months in the midst of the recession.

The weight of bad loans held by Spain's banks grew in March to 10.47 percent of all credits from 10.4 percent in February, according to the Bank of Spain.