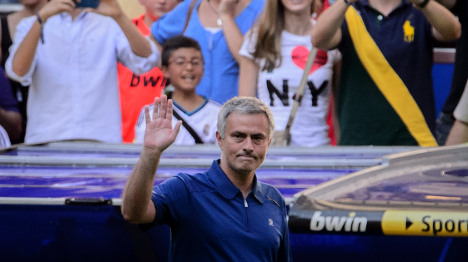 Champions Barcelona rounded off their campaign with a 4-1 win over Malaga to match Real's league record of 100 points from last season on the final day.

Mourinho's name was met with a chorus of whistles when it was read out before kick-off, but he did receive support from a small group of the club's ultra fanbase who chanted his name throughout.

The 50-year-old, widely expected to return to Chelsea, did not appear at the post-match news conference, leaving veteran defender Alvaro Arbeloa to have the final say on the controversial manager.

"We respect his decision, the club's too, and wish him well. We all know that we have taken a major leap in competitiveness and we knew we could have achieved a lot, but due to small details or bad luck it was not to be," he said.

"He has had his successes and failures, as we have all had but he gave his all and defended Real Madrid above everything".

On the field it looked as Mourinho would be given a good send off as first-half goals from Gonzalo Higuain and Michael Essien gave Madrid a comfortable 2-0 lead.

However, Osasuna struck back with two goals in 11 minutes just after the restart through Roberto Torres and Alvaro Cejudo to level matters.

But Mourinho was able to sign off with a win as further goals from Karim Benzema and Jose Maria Callejon ensured Real ended the season unbeaten at home in the league.

With the Portuguese's appearance on the touchline for the final time the main attraction, the game even had to be stopped after barely a minute as photographers and cameramen spilled over onto the pitch.

Barcelona rounded off their championship winning season in style as a first-half blitz saw them dispose of Malaga 4-1 at the Camp Nou.

Goals from David Villa, Cesc Fabregas and Martin Montoya in the opening 16 minutes got the hosts off to the best possible start.

Andres Iniesta then made it 4-0 seven minutes into the second-half before Pedro Morales got a consolation goal five minutes later.

Elsewhere, Real Sociedad qualified for the Champions League for the first time in a decade. Their 1-0 win over Deportivo La Coruna, combined with Valencia's 4-3 defeat at Sevilla, meant they claimed fourth place at the expense of Valencia.

"We are very happy and satisfied because it is the second time in the last number of years that Real Sociedad have reached the Champions League with a French manager," said Sociedad boss Phillippe Montanier.

"It was a very hard game, above all in the second-half when Deportivo gave everything to win the game and they didn't deserve to lose."

Defeat for Deportivo also ensured that the Galicians were relegated as Celta Vigo leapfrogged their rivals with a 1-0 win over Espanyol.

Celta's win meant that Mallorca's 4-2 victory over Valladolid was in vain as they too were relegated along with Real Zaragoza, who were beaten 3-1 at home by Atletico Madrid.

Valencia had gone into the final round of fixtures with a two-point lead over Sociedad and after a run of four consecutive victories they made the perfect start once more when Ever Banega put them in front after just 12 minutes at the Sanchez Pizjuan.

However, things started to turn against Los Che towards the end of the first-half as Alvaro Negredo scored twice in quick succession for the hosts and Jonas was also sent-off to leave Valencia down to 10 men.

Roberto Soldado briefly gave the visitors hope when he equalised 11 minutes into the second-half. But then Negredo sent a clear message to Spain boss Vicente del Bosque, who had left him out of his squad for the Confederations Cup earlier in the week, by scoring twice more to take his tally for the season to 31.

Soldado pulled another goal back at the death for Valencia, but it wasn't enough as they join Real Betis in qualifying for the Europa League.

Valencia's defeat meant Sociedad just needed to win at the Riazor and Antoine Griezmann grabbed the only goal after 22 minutes.

Sociedad also had to see out the final few minutes with just 10 men as Markel Bergara saw a second yellow card, but they held on to seal fourth spot.

Deportivos's defeat meant that victory for any of the three sides below them at the beginning of the evening would see them relegated.

It was their Galician rivals Celta who took advantage as Natxo Insua's 16th-minute goal was enough to give them a 1-0 win over Espanyol.

That result meant that Mallorca's 4-2 win over Valladolid was meaningless, whilst Zaragoza conceded three times in the final six minutes to lose 3-1 to Atletico Madrid and finish bottom of the table.