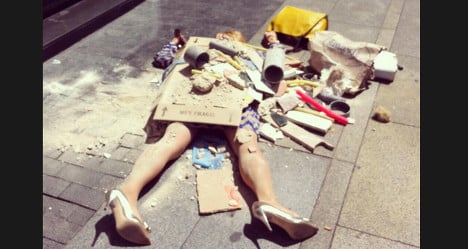 Dominguez's videos mock the absurdity of fasion and have had almost a million hits on YouTube. Photo: Yolanda Dominguez

Dominguez, 35, organized the ‘real fashion victims’ campaign which involved several fashion bloggers spreadeagled under piles of rubble in front of the shop windows of popular clothing stores Mango and Zara.

Bystanders in the capital's central Gran Via street stared at the ‘victims’ in disbelief, “not knowing whether the women were mannequins or if they’d fallen from one of the floors above”, Dominguez tweeted on Thursday.

The Madrid artist told the Spanish edition of the Huffington Post that “the term fashion victim should be used to refer to exploited workers, child labourers and the millions who suffer the results of pollution produced by the clothing factories in these countries”.

It’s not the first time Dominguez has staged and filmed “set ups” to condemn modern day views and the absurdity of fashion.

Her videos, which mock the stupidity of models’ poses and how long people are prepared to queue during Spain’s sales,  have had almost a million hits on YouTube.