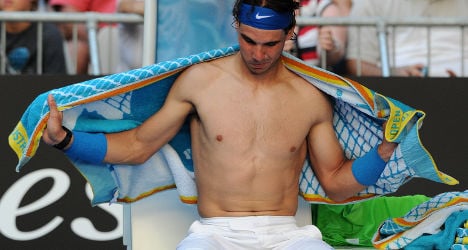 Nadal beat out his arch rival Roger Federer to be crowned the tennis player most women would want to have a "romantic adventure" with.

Rafa — whose on court shirt changes are almost as widely admired as backhand — scooped 35 percent of the vote in a survey conducted by Spanish online dating firm Victoria Milan.

The Swiss Federer, meanwhile, received 22 percent of the vote.

Coming third in was another Spaniard: Feliciano López obtained a very respectable 18 percent. Faring less well was the world number 1 Novak Djokovic who walked away with a doughnut, or 0 percent.

On the women's side of the net, Maria Sharapova was capped the most desirable player. A very high 42 percent of survey respondents would be keen to have an adventure with her.

The women's silver medal went to the Serbian Ana Ivanovic while the Spaniard Silvia Soler was top choice for 8 percent of survey respondents.

"Rafa Nadal is friendly and accessible and evokes tenderness and sexual excitement at the same time," Gallotti added.

The tennis survey includes the responses of 3,283 people in May.