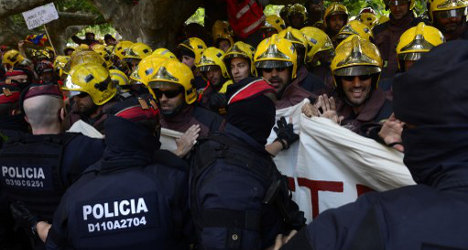 Police moved in with extinguishers and put out some of the burning coffins the firemen had set alight. Photo: Lluis Gene/AFP

Hundreds of firefighters in yellow helmets and red jackets gathered in front of the Catalonia regional parliament, some letting off firecrackers and smoke bombs, and set fire to model coffins marked "public services".

There were light scuffles and police charged the protestors, detaining one, police and labour unions said.

Police moved in with extinguishers and put out some of the burning coffins.

The demonstration struck as the parliament was debating this year's regional campaign to prevent forest fires, a major threat during the dry summer. Several people were killed last year.

Labour unions representing the firefighters warned in a statement that cuts to staff and budgets in the economic crisis "put at risk the safety of workers and the people of Catalonia".

They said the plan involves "a big reduction in resources and above all an increase in the workload on staff".

The unions also complained that this year the emergency summer fire plan had been cut to cover just July and August, where previously it extended into June and September.

"There would have been more public calm if we had dispensed with firefighting aircraft and kept on more employees, but I would not have had a clear conscience," said the regional interior minister, Ramon Espadaler.