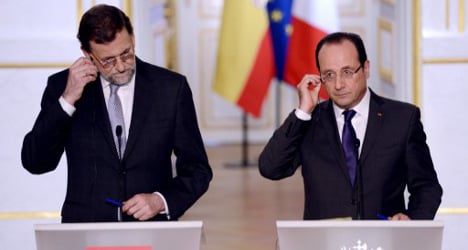 Some 7.5 million Europeans in the ages from 15 to 24 are not in employment, education or training, according to figures from the European Union. In Spain that figure is 55 percent.

The new plan unveiled during a conference on the issue on Tuesday also involves the use of €16 billion in structural funds to promote youth employment, education and innovation.

A total of 55,000 small and medium sized enterprises and 750,000 young people will be the beneficiaries of this cash.

The European Investment Bank (EIB) will also cough up a further €60 billion in loans so that businesses can hire young people.

"This is an emergency and we have to act now," said French President François Hollande during the conference organized by investment think tank Nicolas Berggruen.

"The post-crisis generation is going to ask for answers," Hollande said to an audience which included not only politicians but also business leaders, opinion makers, public relations experts and students.

The plan will go up for approval at the next European Union summit in June.

But EIB boss Werner Hoyer warned Europe's ministers about having "expectations completely over the horizon".

"Let's be honest, there is no quick fix, there is no grand plan," the bank chief was cited as saying by the UK's Guardian newspaper.

The Guardian newspaper also said the country's Department for Work and Pensions and the Treasury had been unable to explain why Britain, with a youth unemployment rate of 20.7 percent, had not been represented at the Paris conference.