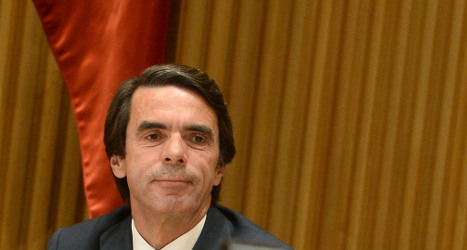 Aznar, Prime Minister of Spain from 1996 to 2004, caused a stir recently when he condemned the government’s current fiscal reforms and tax hikes during a television interview with Spanish broadcaster with Antena 3.

In the interview, the former Popular Party leader also said he was willing to step back into politics if he felt Spain needed him to.

Aznar's comments were taken by many in Spain´s media as a direct attack on his former protegé, the current Prime Minister of Spain Mariano Rajoy.

On Monday night, however, Aznar distanced himself from the affair.

Speaking at a launch for his book  "Biografias Politicas" (Political Biographies), Aznar did, however, restate his key message of last week.

He said the current leadership of the ruling Popular Party needed to "take personal responsibility" to ensure the country followed "the path we want and not the route chosen for us by others".

During his television interview on May 21st, Aznar told Antena 3 it was “pointless” to answer whether he would choose Rajoy again as his successor and added that he felt he was in the same situation as millions of PP voters who would like to see a “clearer political project” from the current Prime Minister.

“I will honour my duties, my conscience, my party and my country, with all the resulting consequences, have no doubt about that.”