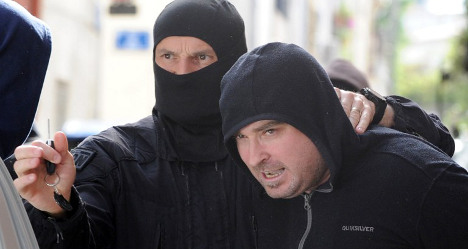 A suspected ETA member (centre) is arrested on May 7th in France, one of six arrests of ETA suspects that broke up the Basque armed separatist group's logistical core. Photo: Sylvain Thomas

ETA, blamed for more than 800 deaths in a four-decade campaign of bombings and shootings for the independence of the Basque homeland which straddles northern Spain and southwestern France, announced a "definitive end" to its armed activity in October 2011.

But the group has not formally disarmed or disbanded as demanded by Madrid and Paris. It has broken ceasefires in the past.

"As an essential part of the peace process, we recommend designing a controlled, orderly and consensual process that culminates in the dismantling of weapons and military structures" of ETA, the experts said in a report presented in the Basque city of San Sebastian.

The members of the so-called "Social Forum", an association of of civil associations and experts set up to spur on the Basque peace process, recommend that the disarmament be supervised by "independent organisms".

Among their 12 recommendations is one suggesting that ETA members held in jails across Spain and France be moved to prisons in the Basque region — a long-standing request Basque separatists. But the report's authors rejected the possibility of granting those prisoners an amnesty.

"The decision by ETA to end forever its campaign of armed violence offers a historic opportunity to the Basque region and its citizens to build the peaceful and prosperous future they deserve," Ahern wrote in the prologue to the recommendations.

"The recommendations here are offered not as an imposition or exact template, but rather as a series of reasoned suggestions, based on many diverse experiences around the world, on how the inevitably difficult issues arising from violence and its ending can be addressed," he added.

ETA has been significantly weakened in recently years, with many of its leaders arrested and arms caches seized in raids by Spanish and French security forces and it has suffered a loss of support among Basque people.

Its last attack on Spanish soil was in August 2009.

Both Spain and France rule out any talks with ETA and had demanded that the group disarm without any preconditions.

In related news, on Monday, Spanish High Court judge Carlos Bautista said he had seen a report from the Spain's Interior ministry which stated that the current blockage in talks on peace negotiations could see the group rearm, reported Spain's El País newspaper.

The Interior Ministry was, however, quick to respond to Carlos Bautista's comments, saying it had no definitive evidence that ETA planned a return to violence.

Bautista made his claim during the trail of  Josetxo Ibazeta, an advisor to the mayor of San  Sebastián, Juan Karlos Izagirre, who belongs to the Basque separatist Bildu party which is alleged to have links with ETA.

Ibazeta is on trail for shouting ETA slogans at two supporters of the Spanish football team in 2012 while making a gesture resembling that of a gun being held to his temple.