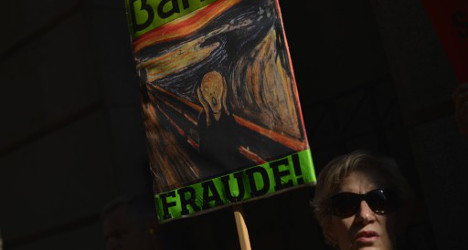 The bank said in a statement it had "made provisions in late 2010 to cover losses" of City National, meaning it "hopes for a net capital gain of around €180 million" from the sale to Banco de Credito e Inversiones.

The sale of Bankia's American subsidiary, brokered by Goldman Sachs and Sullivan&Cromwell, will result in 435 job losses, the statement said.

The move is part of the "commitments under the plan to restructure the BFA-Bankia group approved by the Spanish and European authorities in November 2012," it added.

The transaction should go ahead "between the last quarter of 2013 and the first of 2014" after receiving the go-ahead of the US, Spanish and Chilean authorities, the statement said.

Bankia soon became a symbol of Spain's banking crisis and the huge loans that turned sour after a 2008 property crash.

In May 2012, the BFA-Bankia group said it needed 19 billion euros to shore up its books, prompting Spain to seek a 100-billion-euro rescue loan for the entire industry from Brussels. So far, 41.3 billion euros of the rescue package have been disbursed.