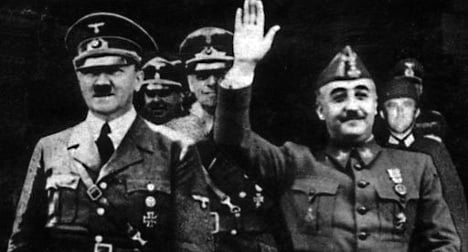 Hitler and Franco met in Hendaye in the French Basque Country in October 1940. Photo: YouTube

Eleven million euros of the day were paid to Spanish senior officials, ship owners and secret agents after Britain’s ambassador in Madrid, Samuel Hoare, warned Winston Churchill’s government that the risk of Spain abandoning its neutral position in 1940 was imminent.

"It may well be that Spain's entry in the war will depend on our quick action," telegraphed Hoare when pushingthe Foreign office in London for an initial $1 million.

"I personally urge authority be granted without delay, and that if you have doubts, the prime minister be consulted.”

More and more sums of money were paid through an account in New York of a Swiss bank to the British ambassador.

The declassified files, brought to light by UK newspapers The Guardian and The Times on Thursday, revealed Jose Jorro Andreo and Rasado Silva Torres as two of the beneficiaries.

"I cannot spend spare time to explain the position in detail," wrote the British ambassador.

He later claimed that British money was responsible for the arrest of plotters trying to persuade Spanish dictator Francisco Franco, a friend of Hitler’s, to join Germany's side in the war.

According to The Guardian, British agents made contact with an unnamed Spanish Republican leader and with members of Spain’s Democratic Alliance.

Other UK ministers persuaded the US to unblock cash for Spanish agents held in banks in New York.

But Franco never seemed determined to join Hitler in war, having to deal with a nation torn by a three-year civil war that had led to half a million Spanish casualties.