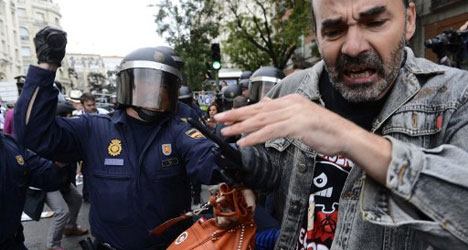 Excessive use of force by police, evictions, domestic violence and racism in Spain have been criticized. Photo: PIERRE-PHILIPPE MARCOU/AFP

'Excessive use of force' by police when dispersing public demonstrations as well as evictions which fail to meet international legal guarantees are specifically criticized, according to Spanish daily 20 Minutos.

AI recognizes in the report that the economic crisis has increased the severity of many problems and urges Mariano Rajoy's government to analyze whether social reforms have endangered human rights.

The report condemns the inability to identify or prosecute police officers involved in violent incidents at demonstrations because of the absence of ID numbers on their uniforms.

A number of examples of this from 2012 are cited, including the case of Ángela Jaramillo who died of a heart attack three months after being struck repeatedly by baton-wielding police, and that of Paloma Aznar, an accredited journalist who was wearing a visible press pass when she was shot with a rubber bullet.

Police behaviour in September at a demonstration in Madrid is also criticized in AI's report, which highlights journalists being threatened and peaceful protesters being struck and shot with rubber bullets.

Investigation of prisoner abuse and torture in Spain is considered "often inadequate" but these problems are "not systemic", according to Esteban Beltran, AI's national director.

Amnesty recommends the construction of a legal framework to protect the rights of people who are evicted as a result of the crisis and claims that current forced evictions are far from meeting international legal guarantees.

The organization says that no progress has been made in this area in the two years since AI first reported that hundreds of thousands of families in Spain were at risk of becoming homeless and that nine million people were living in poverty without access to legal support.

Other areas of concern mentioned in the report include obstacles to worship for religious minorities, domestic violence against women, lack of access to health care for immigrants, the inability to investigate historical crimes and failure to apply international law in counterterrorist operations.