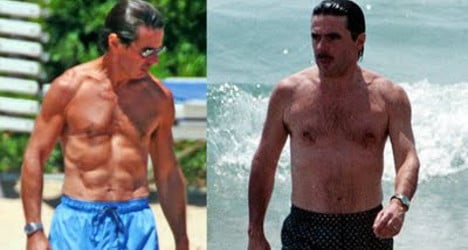 The six-pack-packing former-PM is back in the news and possibly back in the political ring. Photo:Youtube

Who is José María Aznar?

The luxuriantly-coiffured native of Madrid was Prime Minister of Spain from 1996 until 2004, rising from the ranks of the Falange-supporting FES Student Union to lead the PP (Popular Party) to victory in two general elections.

He comes from a political family – both his father and grandfather worked for Franco's government – and he's married to Ana Botella, the current Mayor of Madrid.

However, his unquestioning support for President George Bush's readiness to wage war on Iraq and the ensuing Al-Qaeda bombings in Madrid cost him his presidency, as the Spanish general public turned to the opposing Socialist Party.

Aznar hit the headlines this week when he threatened to rejoin the political arena and criticized the current Popular Party Prime Minister, Mariano Rajoy for not cutting taxes.

The crisis has been tough on everyone. Perhaps he needs the money?

It's possible, but unlikely. In addition to a substantial income as a writer, José Maria is a board member and advisor to several companies including Rupert Murdoch's News International and Endesa, the energy utility that he privatized while in power and from whom he receives over €200,00 a year.

He regularly appears as an international guest lecturer at American universities, giving him the chance to brush up his once broken English.

He also gets a pension of €70,000 a year, plus expenses, for being a former prime minister.

Yes, but he probably has a lot of bills…

If times do get tough for Aznar, he can always count on the generosity of his friends. Court documents recently revealed that Francisco Correa, currently under investigation as part of the corrupt Gürtel business network, gave €32,452 to his pal José Maria as a gift to pay for lighting rigging at the wedding of Aznar's daughter in 2002.

Wedding guests Silvio Berlusconi and King Juan Carlos of Spain always like to look good for the ladies. Cameras. I meant cameras.

It's a bit suspicious, though. What did the Aznars have to say about it?

"I find your lack of faith disturbing."

That was Darth Vader, wasn't it?

Sorry. "The doubt is offensive," said Mrs. Aznar when she was asked about it this week.

Isn't Aznar a bit old to be jumping back into politics?

José María may be 60 years old but he's still a fine figure of a man. He claims to do 1,000 sit ups a day and paparazzi photographs of his rippling 'six-pack' abdominals set right wing Spanish hearts aflutter in 2009.

But where's the magnificent moustache?

Aznar's splendid facial hair was a key component of his macho image when he was in power. Urban legend says that he first grew it to cover the paralyzed upper lip he has as a result of an altercation with doormen in an establishment of ill-repute in La Rioja, which he investigated during his time as a tax inspector.

His many fans hope that they have not seen the last of it, or him.