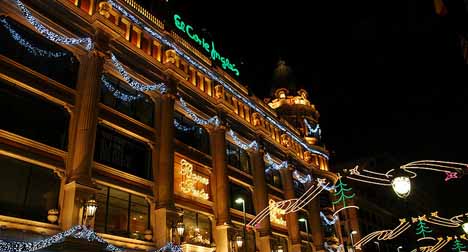 It "has launched a restructuring of its current debt in the normal course of its financial activity, with the aim of improving it, making it more flexible and adapting it to the environment both in its sector and in the financial sector", the group said in a statement.

"The size of the restructuring is around five billion euros," it said.

It added that the group had €7.45 billion shareholder capital plus real estate holdings worth several times more than the amount of debt to be restructured.

A spokeswoman for the company told AFP the move was "normal and part of a company's usual operations", adding that the company hoped to make the most of the current low interest rates by carrying out the restructuring now.

The statement said top Spanish banks, some foreign ones and "other institutions" had shown an interest in taking part in the debt restructuring.

A source close to the matter said the group had turned to US bank Morgan Stanley.

El Corte Ingles, one of Spain's biggest companies but not listed on the stock market, had turnover of €15.8 billion in 2011 and net profit of €210 million, down by 34 percent on the previous year, according to its latest results.

It responded by slashing the price of thousands of products by a fifth last year.