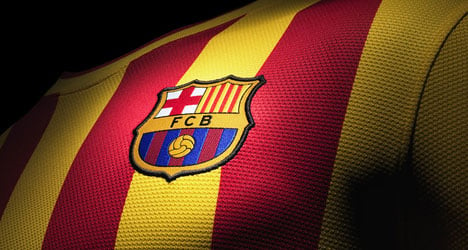 The red and yellow stripes of 'la senyera' are a potent symbol of Catalan identity. Photo: FC Barcelona

The home shirt is a variation on Barça's traditional blaugrana (blue-and-red) stripes but the collar, like the club crest, features four red stripes on a yellow background: la senyera – the flag of Catalonia.

The red-and-yellow design has also been used as the main design motif of the club's new away shirt.

It is the first time in history that the club has used the senyera flag in this way on a shirt, at a time when Catalan identity and the region's political future are hot topics.

La senyera's four stripes are said to represent the blood of legendary Catalan hero Wilfred "The Hairy", wiped with four fingers onto a golden shield as he lay on his deathbed.

Its origin story is almost certainly apocryphal but the flag has become a powerful symbol of Catalan identity.

It is incorporated, alongside a white star in a blue triangle, into the unofficial 'estelada' flag adopted by supporters of Catalan independence.

The club's motto of 'Més que un club' (More than a club) appears on the back of the collar of both shirts.

Barcelona has always maintained a politically neutral stance while identifying strongly as a Catalan organization, but the club has become a focal point for gestures of support for the secession movement.

Crowd chants of "in-inde-independencia" have been heard by Champions League TV audiences around the world at 17 minutes and 14 seconds into FC Barcelona home games at the Nou Camp.

The time represents 1714, the year when Catalan forces were finally defeated by forces of the Spanish Bourbon throne at the end of the 14-month siege of Barcelona.

Barcelona's away shirt design may be red and yellow on the outside but there is also a green element: the new kits are made from recycled polyester, with up to 13 recycled plastic bottles incorporated into each set of shirt and shorts.