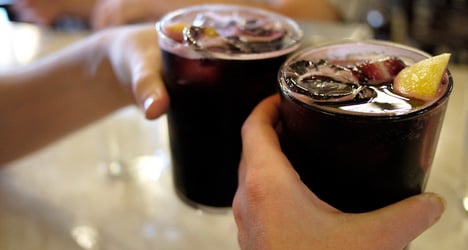 The drink has been described as 'sangria-esque, minus all that fruit-chopping and waiting.' Photo: artescienza/flickr

Originally from the Basque Country but now popular all over Spain, the drink consists of a mix of red wine and Coca-Cola, served cold.

Variously spelled as 'calimotxo' or 'calimocho', the drink was originally known as 'Rioja Libre' in some areas.

Infamous as the typical fuel of 'botellón' street drinking parties popular with young people, kalimotxo often consists of cheap red wine from a Tetra Brik, such as the Don Simón brand, crudely mixed with Coke.

The drink is said to have been invented to cover the taste of cheap wine.

Described by Schaap as "surprisingly sangria-esque, minus all that fruit-chopping and waiting, and wonderfully refreshing," she lauds kalimotxo as "a fine pick-me-up: an ideal afternoon drink when you know you’ve still got a long day, and night, ahead."

How to make a kalimotxo fit for a New York cocktail bar, according to the NYT:

"In a glass filled with ice, combine 3 or 4 ounces dry red wine (preferably Spanish) with an equal amount of cola and 1 squeeze lemon juice. Garnish with a lemon or orange slice to serve."