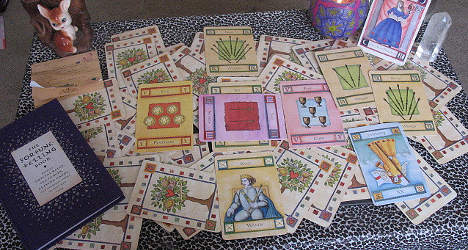 Aragon police arrested Laparra last week while he and four of his colleagues were confronting the clairvoyant for using a spell that had apparently not worked.

The Valencian businessman was hoping to get his money back and evidence suggests that the mind reader had indeed foreseen his imminent arrival as she’d wrapped €140,000 in a newspaper, local daily El Periódico de Aragón reported on Friday.

The fortune-teller still decided to phone Spain’s Civil Guard police while her father opened the door to Laparra and his associates to hand over the large sum.

Officers were at the scene within minutes, seizing the money as evidence for the court case and arresting all five men in the process.

Laparra, who is known to have heart problems, suffered an anxiety attack when the Civil Guard arrived at the house and had to be rushed to Zaragoza’s clinical hospital.

“There was no violence or intimidation,” argued Laparra’s lawyer, despite the fact that one of the people accompanying the businessman had a replica gun on them.

Laparra is awaiting trial for his alleged involvement in the so-called Gurtel case, a business and political corruption scandal related to contract awards, allegedly reaching into the senior ranks of the Popular Party.

He also skipped court on Monday when he was due to appear before a judge for his supposed looting of funds from football team Club Deportivo Castellón, of which he was previously the president.