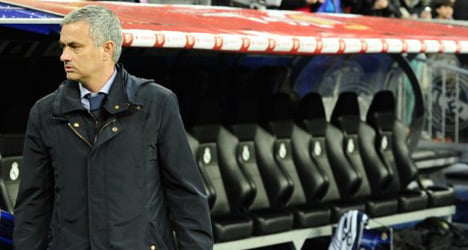 The Portuguese manager is widely tipped to re-join Chelsea after a season without trophies in Spain. JAVIER SORIANO / AFP

A 2-1 defeat to Atletico Madrid in Friday night's Copa del Rey final meant Real will end the season without a major trophy and has accelerated claims that Mourinho could make a return to Chelsea, who he previously managed between 2004 and 2007.

Madrid sports daily Marca ran the headline "he is going to Chelsea" on Sunday morning, adding that "Real Madrid could make his goodbye official this week."

Another Spanish newspaper, broadsheet El Mundo, also reported that Mourinho may not even be in charge for Real's final two games of the season against Real Sociedad and Osasuna.

"The board and the president, Florentino Perez, have had enough after the defeat in the final of the Copa del Rey and the tense situation in the dressing room, and are planning to bring to an end the Portuguese's reign immediately."

Mourinho admitted after Friday's defeat that he had failed this season as Real also surrendered their La Liga title to Barcelona and were eliminated for the third time in three years under Mourinho at the semi-final stage of the Champions League.

However, the other Madrid sports daily AS took a different line and claimed that although Mourinho will go at the end of the campaign, there is no immediate plan to sack him.

"No one in the club thinks that an exit will take place before the end of the season. That is not in the script, although Mourinho is always unpredictable," they said.

Focus has also turned to Madrid's principal target to replace Mourinho should he leave, Carlo Ancelotti, who is due to meet with current employers Paris Saint-Germain to discuss his future.

Madrid are "waiting on the meeting today between Ancelotti and PSG", added AS, before making their move for the two-time Champions League winning coach who has also won league titles in Italy, England and France.