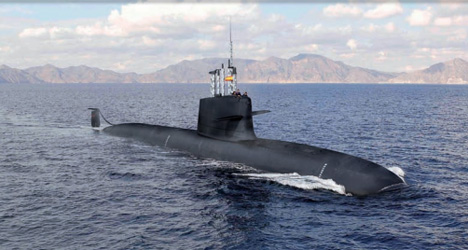 Dive, Dive, Dive: Calculations show that the S-80 would sink like a stone. Photo: Navantia

Sunday's El Mundo newspaper reported on the latest developments in the submarine saga that has given Spain's defence department a sinking feeling.

The €2.2 billion contract to design and build four S-80 underwater craft, billed as “the most modern submarine in the word” has been put on red alert after engineers found flaws in the plans and sounded the klaxon.

€530 million had already been spent when calculations made by engineers at Navantia, the construction firm, revealed that the submarine as designed would dive to the bottom of the sea and stay there due to excess weight.

Opposition party United Left has mocked the development in parliament and demanded explanations.

Two possible solutions have been proposed to help the fat-bottomed sub get off the ground: trim its weight or make it longer.

The second is more feasible but also more expensive as every extra metre added to the submarine would increase its cost by more than €7.5 million.

The president of the Navantia board has defended the work of the company's Cartagena shipyard and complained of “meddling” by unqualified people.

He explained that it had been reported as far back as 2005 that the development process was not being properly followed and that there was a lot of necessary improvisation due to the addition of new elements at the request of the Ministry of Defence.

The Spanish navy will take delivery of the four submarines next year, in the hope that they will be capable of floating.