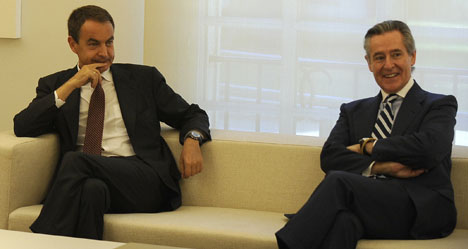 Miguel Blesa, 65 , who has links to senior members of Spain's governing Popular Party, was held overnight in a Madrid jail and came out on Friday after putting up €2.5 million ($3.2 million) in bail, a prisons service official told AFP.

Judge Elpidio Jose Silva said in a written ruling earlier that Blesa presented an "undeniable flight risk" and fixed the bail sum pending investigations of his management of the bank.

Caja Madrid was one of several old regional savings banks, many run by political appointees, that expanded during Spain's building boom and had to be merged after the bubble burst in 2008.

The judge is investigating the takeover by Caja Madrid in 2008 of the City National Bank of Florida, which was caught up in the US subprime mortgage meltdown that year.

The judge said in the ruling that he saw "reasonable indications of criminal responsibility" in that takeover.

Caja Madrid paid $1.17 billion to take over the Florida bank, about double what it was worth, the statement said.

It said this was a sign of "very bad banking management" that posed "a systemic risk to Caja Madrid in the context of the economic crisis".

Prosecution lawyer Luis Pineda told a news conference on Friday that the takeover was carried out without authorisation from the relevant authorities.

He alleged that managers of the Spanish bank could have pocketed "more than $100 million in commissions" in the deal.

Blesa left Caja Madrid in 2009 shortly before it was merged with six other savings banks to form Bankia, as part of a major overhaul of Spain's financial sector.

Bankia was nationalised in 2012, prompting Spain to turn to its eurozone partners for tens of billions of euros of emergency aid to rescue the financial sector.

Dozens of suspects have been questioned by a judge in a separate investigation of alleged fraud in the running of Bankia.

Blesa was the first major banking figure to go behind bars in the course of Spain's banking saga, albeit briefly.

Pineda said that with the detention of Blesa "a process of flushing out who was responsible has begun".

He added: "This country needs to be reassured that people will pay for what they have done."