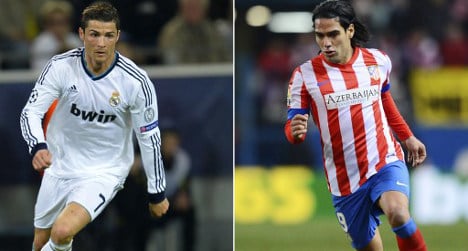 All eyes will be on Real and Atleti's top scorers Cristiano Ronaldo and Radamel Falcao. Photo: Pierre Philippe Marcou/Odd Anderesen/AFP

An acrimonious campaign marred by on-pitch failure and behind-the-scenes unrest is set to end with manager Jose Mourinho leaving Madrid, but the Portuguese will hope to bow out with one more piece of silverware.

Madrid will finish a distant second behind champions Barcelona in La Liga and once again failed in their bid to win that elusive 10th European Cup, losing to Borussia Dortmund in the semi-finals, so all that is left is the chance to win back the Copa del Rey, which they also won in Mourinho's first season in charge two years ago.

Both clubs wanted this game to be played in Madrid and Real's Santiago Bernabeu home, with its 80,000 capacity, got the nod over Atletico's smaller Vicente Calderon.

That would appear to give Mourinho's side even more of an edge but, when the clubs last contested the final, Atletico beat Real 2-0 at the Bernabeu in 1992, with Bernd Schuster — the German who later coached Los Blancos — and Paulo Futre scoring the goals.

Madrid also lost 2-1 to Deportivo in the 2002 final despite the Spanish federation allowing them to stage the game at the Bernabeu to mark Real's centenary.

However, Atletico, the club of the grimy working-class quarters of southern Madrid, have endured over a decade of misery against their wealthier neighbours, from the upmarket Chamartin district to the north.

Remarkably, they have not won any of the last 25 meetings between the teams since a 3-1 win at the Bernabeu in October 1999, a season in which they were relegated.

In a sense, though, there is no disgrace in that — figures reported recently by sports daily AS indicated that Real's budget for this season is €517 million ($665m) compared to 123 million euros ($158m) for Atletico.

"It's going to be a strange final because we're playing in our stadium but the fans will be divided 50/50," Real's Cristiano Ronaldo, whose majestic header in extra-time secured victory in a tense final against Barcelona in 2011, told Real Madrid TV.

"That isn't going to take away our ambition to win this Cup. We know that the stadium will be divided. Let's hope that the best team wins. If we go out on the pitch strong and we play as we know how, we're going to win."

Mourinho has lost the support of key players in the dressing room this season, especially due to the tension between him and goalkeeper Iker Casillas which has seen the Spain captain frozen out of the side.

Losing against Atletico — something that has not happened to any Madrid coach since John Toshack — would be the worst possible way to bow out, and Mourinho's preparations for the final have not been helped by an injury to young French defender Raphael Varane.

Despite that, Real, whose run to this season's final included eliminating holders Barcelona in the last four, remain the favourites, but Atletico are hoping to end their derby hoodoo when it matters most.

"I am convinced that we will win," said Atletico's former Real full-back Juanfran.

"Our weapons have served us well all season long. This Atletico has a clearly defined strategy and we know what we need to do to win."

That strategy has been based around a mean defence — the best in La Liga — and the goals of Radamel Falcao, who has scored 28 in the league.

Coach Diego Simeone played in the last Atletico team to win the Cup, in their double-winning 1995-96 season. He has revived the fortunes of the team since taking charge, winning the Europa League and the European Super Cup last year and now overseeing their best league campaign since 1996, with third place and automatic qualification for next season's Champions League group stage guaranteed.

For all that, he knows victory against Real would be the biggest triumph yet of his reign.