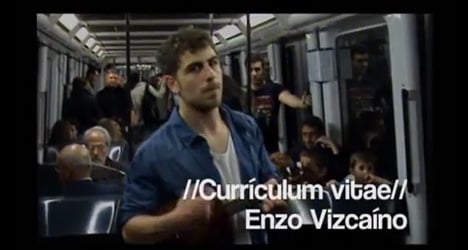 Journalism graduate Enzo Vizcaino, of Petrer (Alicante) has become a hit on YouTube thanks to his creative job-hunting strategy.

After moving to Barcelona in September to begin a post-grad in writing, he gradually became frustrated with his inability to land a job to help support his studies.

He came up with the idea of a musical CV while playing the ukulele with a classmate, reports Catalan daily El Periodico.

"Degree in Journalism and a postgraduate diploma that I brought here folded up, if you want to see it," begins the song.

After airing his composition in public on Barcelona's Metro, a video of the performance was uploaded to YouTube where it quickly received over 90,000 views.

Finding a way to stand out from Spain's crowd of 6 million unemployed is a challenge that requires creativity.

In his blog, Vizcaino explains that he can no longer afford to keep posting CVs and application letters "that would end up in the recycling bin" and that "photocopies have become really expensive."

He assures his readers that the video does not mean that he is a "performing monkey" but explains: "I hope that the song that I've written can showcase my abilities as a writer, which is what I am dedicated to becoming."

The video has gone viral on social networks like Facebook and Twitter, to the surprise of Vizcaino who says that he "didn't expect it" and just "put it up to see what would happen."